As the only Grand Slam tennis tournament to be played on a clay surface, the annual French Open in Paris, France, serves as the epicenter of the tennis universe each May and June, and has done so since its inception in 1891. The French Open, often referred to by its venue name, “Roland Garros,” will take place from May 26-June 9, and, as usual, will feature the best players in the world. Prepare for the event with the preview below, and be in attendance at this year’s tournament with a purchase of 2013 French Open tickets from Vivid Seats.

Buying French Open Tickets and Roland Garros Stadium Information
In the marketplace, you’ll find an array of options for each day of the tournament. Unless otherwise specified, many French Open tickets will be electronically transferrable. Feel free to contact customer service at any time with questions via Live Chat or by calling 1.866.848.8499.

The inventory includes your choice of French Open tickets for men’s and women’s singles action for each round, as well as doubles, with all boasting a wide variety of seating depending on which matchups you wish to attend. For access to the grounds and any of the 18 general admission courts, purchase general admission tickets, while those looking to witness a match on one of the main courts can purchase tickets for an individual court inside Roland Garros Stadium. Section are referred to as “categories,” so be sure to check out the Roland Garros seating map below for details on the layout of the venue. 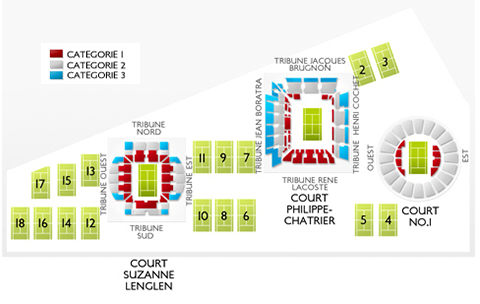 When you arrive at the grounds of Roland Garros, you can enter at Gate B, the Mousquetaires Gate.  The nearest main court will be “Court No. 1,” which seats over 3,500 spectators. On your way to the legendary 15,000-seat Philippe-Chatrier Stadium—host of the tournament’s biggest matches—you will come across La Place des Mousquetaires, a beautiful square where fans gather throughout the day to watch the action on one of the many giant video screens available. In between Centre Court and the final main court—the 10,000-seat Suzanne-Leglen Stadium—you will find Les Jardins de Roland Garros, the main eating attraction on the grounds—a restaurant that features a wide variety of healthy and delicious meal options for all fans.

French Open Draws
The men’s and women’s singles draw will be released on May 24, with doubles coming on May 26.

Men’s Singles Outlook
Over the last eight years, the French Open men’s singles event has been won by a total of two men: Rafael Nadal and Roger Federer. While Federer—owner of the record for most men’s Grand Slam titles ever—has only won once in that time frame, Nadal has won the title a record seven times. With a victory in the 2013 French Open, Nadal would be in sole possession of the record for most titles at a single Grand Slam tournament in the open era. Nadal’s incredible athleticism gives him an advantage at the French Open, a tournament that includes five-set men’s matches without tiebreaker finishes, and takes place on a slow playing surface that makes it one of the most grueling events in tennis. Although Nadal’s world ranking has slid due to a myriad of injuries over the past year, the Spaniard appears to be returning to top form just in time after winning the Barcelona Open in April. Nadal is not the only competitor with his sights on a tennis milestone, as world No. 1 Novak Djokovic needs a French Open title to become only the eighth men’s player in history to complete the career Grand Slam.

Women’s Singles Outlook
The top two female players in the world, Serena Williams and Maria Sharapova, have both completed the career Grand Slam, and both figure to be the among the favorites to reach the finals at Roland Garros this year. Although both athletes possess powerful styles, they have impressively managed to adapt their play to the clay surface and can dominate a match from the net or from the baseline. Williams has not captured a title at Roland Garros since her memorable victory in 2002 over sister, Venus. Sharapova, meanwhile, is the defending champion after defeating Sara Errani in straight sets last year to capture her first-ever French Open title. If the two superstars happen to meet for an epic conclusion to this year’s tournament, Serena will be motivated to unseat the reigning champion, while Sharapova will have revenge on her mind after losing to the American in the gold-medal match of the 2012 Summer Olympic Games in London.

Djokovic, Murray Still in Play as US Open Tennis 2013 Continues

US Open Looming in Flushing Meadows

Gearing Up for US Open at Flushing Meadows

Open in the US