When traveling to a new city (or trying to find an exciting activity close to home), fighting crowds might not be on the top of your to-do list. Luckily, there are plenty of high-quality, not-so-well-known music venues for you to check out in a city near you.

Vivid Seats teamed up with StudentUniverse, a travel booking website on which students can receive discounted fares on flights, hotels, tours, and more, to determine top cities for student travel. The winning cities included New York, Orlando, Seattle, Las Vegas, Los Angeles, San Francisco, Miami, Boston, Washington D.C., and Chicago. Vivid Seats then looked at each city’s music venues with a capacity of 3,000 or less to determine the most popular based on the number of tickets sold.

While researching sites for your next concert tickets purchase, consider visiting one of the intimate, first-class venues featured below. 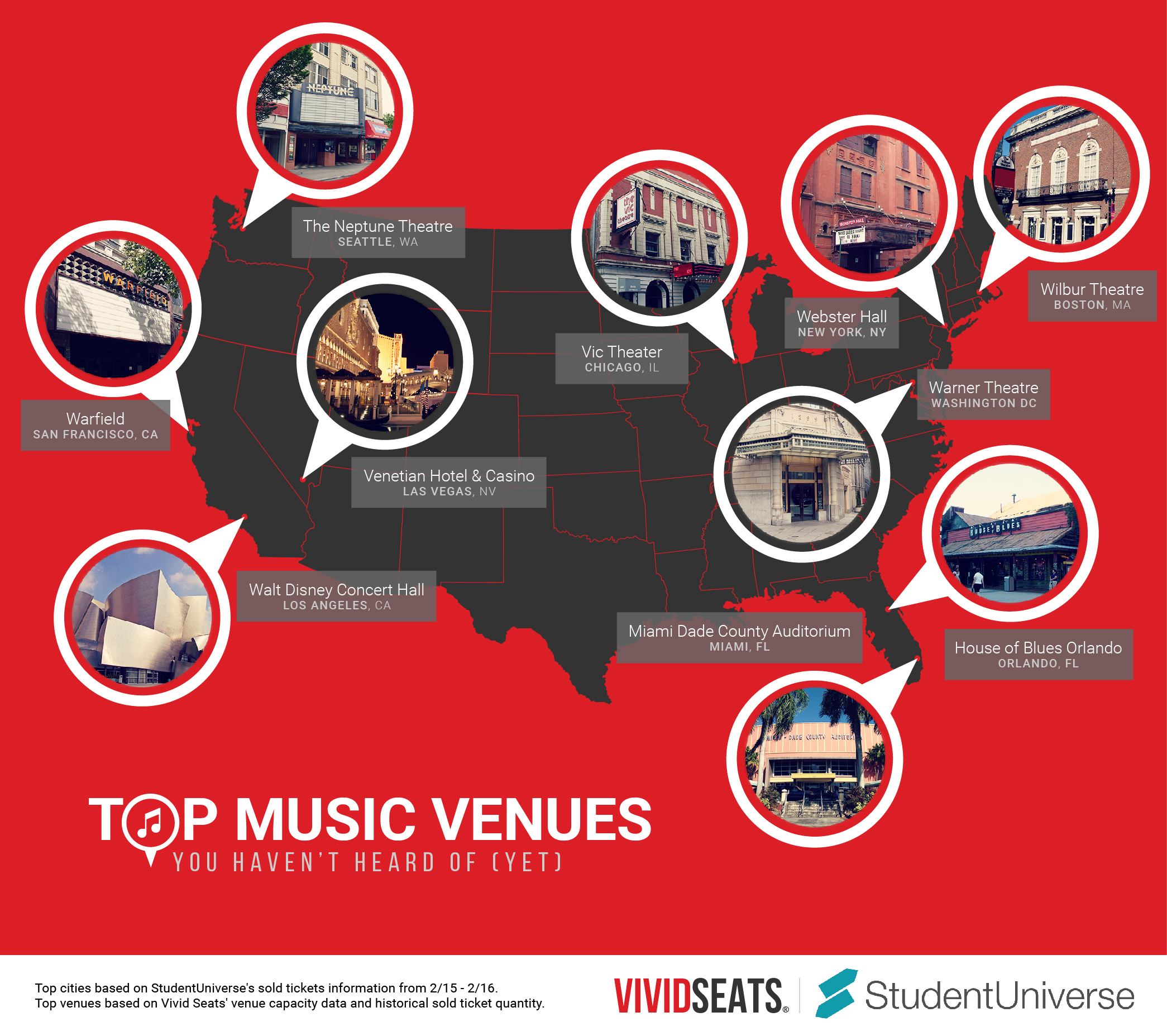 Embed our Top Music Venues You Haven't Heard Of (Yet) infographic on your own site by copying the code below:

Webster Hall, New York
Originally built in 1886 and later renovated in the 1990s, Webster Hall in New York boasts three performance spaces – the Grand Ballroom, Marlin Ballroom, and The Studio. Top artists set to pass through in 2016 include Bryson Tiller, Beach House, and Charlie Puth, among many others.

House of Blues, Orlando
With events taking place across the Main Stage, Foundation Room, and Crossroads, Orlando’s House of Blues offers a little something for everyone. Best of all, it’s located right in the middle of Disney World (Typhoon Lagoon is across the street!).

The Neptune Theatre, Seattle
Once upon a time, the Neptune Theatre was actually a single-screen movie venue. Now, this historic space hosts some of the hottest shows in town, including 2016 shows from Lake Street Dive, Craig Ferguson, and Parachute. The Neptune Theatre also is home to Nights at the Neptune, a free show featuring everything from art shows to stand-up comedians.

Venetian Hotel and Casino, Las Vegas
When you think of Las Vegas, you might picture glitz, glamour, and (gulp) tourists. The Venetian certainly encompasses all of those things, but it also is a great venue for quality entertainment across a wide variety of genres, putting on everything from classical concerts to live comedy throughout the year.

The Warfield, San Francisco
The Warfield has been keeping busy for decades hosting some of the biggest acts in music. From Slayer to Widespread Panic, Tinashe, and Natalie Merchant, there has been no shortage of memorable shows at this former vaudeville theater in San Francisco.

Wilbur Theatre, Boston
To catch a great upcoming music or comedy show, head to Boston’s Theater District, where the historic Wilbur Theatre is located. With an origin dating back to 1914, updates were later made in 2008, so guests enjoy that old world feel with plenty of modern conveniences.

Warner Theatre, Washington, D.C.
Bob Hope, Jack Benny, and Jay-Z? All of these artists have graced the Warner Theatre stage. The venue also hosts the BET Honors ceremony and Washington Ballet’s annual performance of The Nutcracker, in addition to hosting shows by the likes of Santana, David Cross, Million Dollar Quartet, and more.

Vic Theater, Chicago
Wrigley Field may be just blocks away, but Chicago’s Vic Theater could not seem more distant from the big crowds and loud organs. In addition to hosting concerts and comedy shows, the Vic hosts Brew & View, in which patrons can access the venue’s bar while watching movies on a large screen.