Becoming a professional athlete is the dream of tens of millions of children across the country. With far less available positions than home run hitting, slam dunking, touchdown catching applicants, aspirations change. If you can’t get paid to play sports, why not get paid to work elsewhere within the industry? For Chicago native Vik Chokshi, a winding path that included BYOB painting parties has led to a successful career as a sports journalist. Vivid Seats spoke with the talented penman about his winding path, his work as a sports storyteller and more. 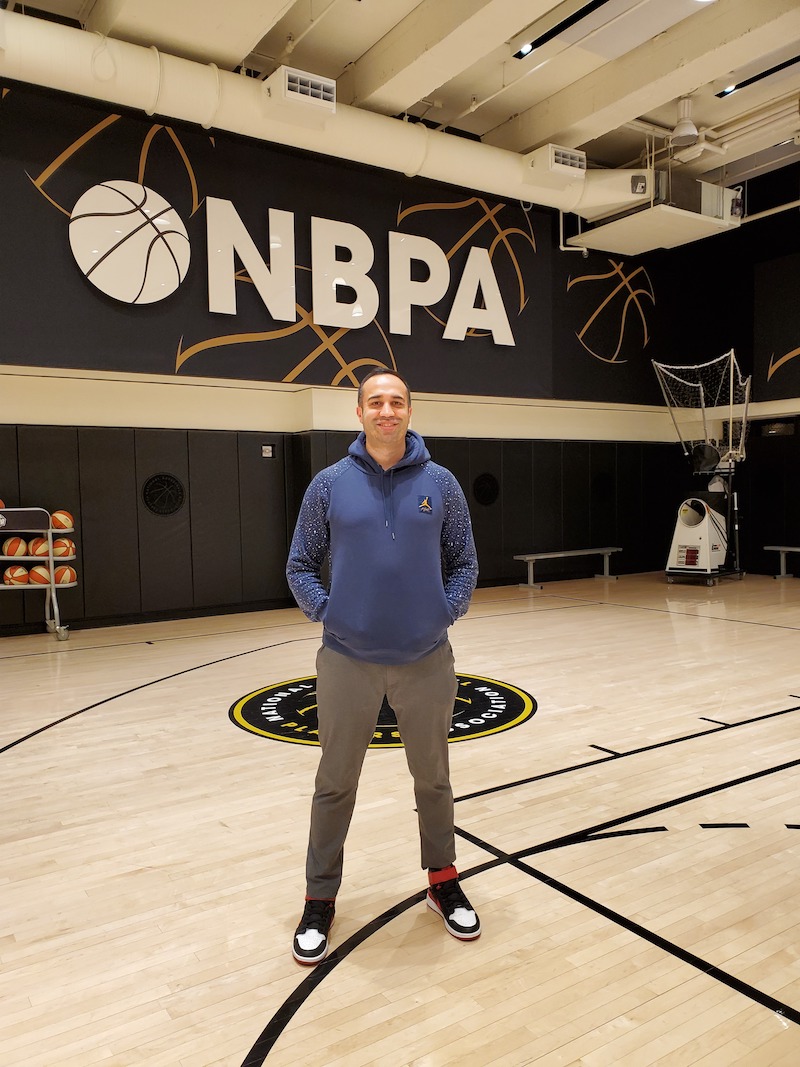 Vivid Seats: Your Twitter bio lists a number of skills, with marketer, writer and connector among them. Tell us how that came to be.

Vik Chokshi: As my wife likes to say, I’ve had an “interesting” career arc. I’ve done it all from being in the IT field, sports blogging, journalism, founding a couple of businesses, working in sales, and being a Marketing consultant.

My sports journey began a long time ago when I started my blog Docksquad Sports. But, that was more of a hobby. I consider it really beginning in 2017, when, as I like to call it, a mid-life crisis struck me. I lost my parents at a young age and that changed my perception of life. I truly believe that life is short, so we should try to enjoy it to the max everyday. That also means doing things that you love. For me, that has always been sports, so I wanted to try to make a career out of it.

I ended up cold emailing 500 people in the sports industry to try and get my foot in the door. But, more than anything, I just wanted their advice on how to go about doing that, rather than actually asking for a job. I was scared, but I had nothing to lose. To my surprise, a couple of big guns in the industry wrote me back. One was Chad Millman from The Action Network and the other was Jason McIntyre, who at that time was at a site he founded, The Big Lead.

Both guys were kind enough to jump on phone calls with me, give me feedback, and even asked for samples of my work. They said they would keep me in mind if anything popped up, and a couple of months later Jason gave me my first real writing gig at The Big Lead. A few months after that, Chad contacted me to freelance for them at The Action Network, and that is how all of this came to be. I'll always be grateful to them both.

When it comes to marketing, I have to be honest. As most people know, there is not a lot of money to be made while working in sports as a rookie. I had to do something to fund my passion, so I used the marketing skills I picked up as an entrepreneur to help do that. I’ve been blessed to help put together some really cool projects. My three favorites include: charity events for Dwyane Wade and the Chicago Bears, and the biggest High School Basketball showcase in the country, the Metro Classic.

As for being a connector, honestly, I love connecting people to opportunities and making introductions among clients, colleagues, friends, friends of friends, etc. If I know someone’s skill sets can help or benefit a friend or colleague of mine, I love introducing them via email. Because, why not?

VS: Journalists face so many challenges these days. Even when you were doing other work, how did you continue to move forward within the industry?

VC: For being such a huge industry, it is super small with not a lot of turnover. It takes a lot to get your foot in the door and a ton more to actually last. Making it, that is a whole other level.

When I lost my gig at The Big Lead due to the Minute Media acquisition, I can’t lie, it was tough. With a wife, two kids, and a mortgage, I was close to giving up.

But, working in sports has always been my passion, so I had to grind. Everyone in the industry is extremely talented, so it’s already tough. I try my best to network within the industry, always treat people well, support everyone in the game because I know how hard it is, and above all, work hard. That means never saying no to an opportunity. That means working a lot of nights and weekends. Basically, whatever it takes to keep this passion of mine going. Doing all of those things have helped me to continue moving forward.

I also would be remiss if I did not mention my wife during this interview. If it wasn’t for her, none of this would be possible. Ever since we got married, she has always supported my dreams both mentally and financially.

VS: Sports writing is currently in flux, with podcasts and social media changing the game. How have you managed to stay ahead?

VC: If you’ve read "Range" by David Epstein, his book talks about generalists doing well in today’s society. I’ve done so many different things, so I’ve tried to learn from every past experience and opportunity that I’ve had. I try to use all those different skills to help me stay ahead.

I love that you mentioned podcasts and social media, because I’m a huge fan of both. When it comes to podcasts, I’m addicted to listening to them. That and audiobooks. I try to learn from the pods and books to always improve. Whether that is just to learn or to be entertained or pick up little things from the pod hosts so that I can implement those tactics into my own work.

I host a couple of my own podcasts. During the NFL season, me and two friends do a weekly NFL picks pod called The Syndicates. I also have my own pod called Viktory Lap. It’s a little play on words on my name and Nipsey Hussle’s song titled the same. I try to bring on fun guests that reside somewhere in the Sports and Entertainment industry to talk about their journey and then throw in a little fun Q & A. The coolest name I had on so far was Utah Jazz guard Donovan Mitchell. I’m currently rebranding the pod right now, but already have a ton of fun guests lined up, so I can't wait to put it out there.

When it comes to social media, I love all the platforms. Overall, I’m obsessed with Twitter. I use it to get my news and keep up with things that I am interested in. Twitter is my favorite app by far because it gives you the ability to connect with people that would otherwise be impossible. I’ve made so many real-life relationships because of Twitter and also gotten most of my gigs in the sports world via connections I made on the app. Heck, you and I connected through Twitter as well. I also try to follow people that I look up to in various industries. The platform really allows you to see what some of the best, brightest and most talented people in the world are thinking in real time.

VS: Alright, let’s get real. I know you’re a big Marquette fan. Aside from Dwyane Wade, who are your all-time favorite Golden Eagles?

VC: It is hard for me to name just one guy, especially because Basketball is all we had at Marquette (no football). Of course DWade and Jimmy Butler top the list because of their NBA success, but I have love for that entire 02-03 Final Four squad. That was the closest MU has ever gotten to a chip in my lifetime, so that run was just incredible. And, since I was a super senior at the time, that year’s squad made it just magical in all aspects.

VS: You’re a big supporter of all things Chicago sports as well. Got any good news for Bears, Bulls, Hawks, Sox, Cubs or Fire fans?

VC: My parents loved sports, especially the Payton-led Bears and the Jordan Bulls. I would watch with them, that is how I became such a huge Chicago sports fan. While working you have to separate your fandom from your work, but I’ll always be a Chicago sports fan at heart.

This past season was pretty brutal for all of Chicago sports, but I actually see good things ahead for our local teams when sports resume.

I’m excited beyond words about the regime change with the Bulls. I’m a huge fan of Arturas Karnisovas and truly believe it is going to be fun to be a Bulls fan again.

When it comes to the Cubs, I’ll always trust in Theo Epstein as long as he is here because he brought Cubs fans something we’ve all waited our whole lives for. I know people are down on the Bears, but I see them having a bounce back year if they can stay healthy and do well in this upcoming draft. Those are big ifs, but still. While I’m a Cubs fan at heart, I like what the Sox are building and am a fan of Rick Hahn.

VS: You’ve also worked to cover the city’s up-and-coming athletes, including high school basketball players. Who should fans be paying attention to?

VC: This is a loaded question that we can probably talk about on its own for 30 minutes. Chicago always produces some of the best ballers in the country on a yearly basis. There is so much great, young talent in the State right now, so forgive me if I miss anyone. But, here are ten young guns I believe that are going to do great at the next level are: Adam Miller from Morgan Park, Ahamad Bynum from Simeon (Will Bynum’s nephew), Max Christie from Rolling Meadows, Bryce Hopkins from Fenwick, DJ Steward from Whitney Young, Ramean Hinton from Curie, Dominic Martinelli from Glenbrook South, Dante Maddox, Jr. from Bloom, Aquan Smart from Niles North and Ahron Ulis from Marian Catholic.

Also, keep an eye out for AJ Casey out in Tinley Park. He is younger than all of the aforementioned guys and might end up being the best of the bunch.

On a side note, some of my favorite follows in regards to the Illinois basketball scene as a whole are Michael O'Brien, Ricky O'Donnell, Eugene McIntosh and Terrence Tomlin. Give those guys a follow.

VS: You’ve had such an impressive career already. What’s next?

VC: Thank you for interviewing me and the kind words. As someone that has a long way to go and still trying to find his way in the industry, I appreciate it. With sports currently on hold due to the coronavirus, a lot of things are in flux right now. While I've lost a few projects due to the stoppage, I’m still blessed to have a handful of companies that I am doing both writing and marketing projects for. I also have a couple of big NBA related stories coming out soon, but can’t spill the beans just yet. And, like I mentioned before, I can’t wait for my new podcast episodes to drop soon!

But, overall, who knows what the future holds? I would love to possibly do more radio and TV. I also envision myself working on the business side of sports one day. As long as my family supports me, I’m going to try to keep this dream going and see where it takes me.