"Athletes want to be rappers, rappers want to be athletes," said New Orleans native Lil Wayne, during a 2014 interview with ESPN.

The truth is, the connection between rap and sports--specifically basketball--long precedes Lil Wayne's career, as both hoops and hip hop have been intertwined pillars of modern culture for decades.

To celebrate the deep connection between basketball and hip hop, Vivid Seats teamed up with Audiomack, a leading music platform where millions of fans discover the hottest trending music anywhere, to design basketball jerseys inspired by rappers representing their home towns.

Vivid Seats' data for the top-selling artist in each city powered half of the rappers we spotlighted, while Audiomack's data and expertise on the top up-and-coming artists drove the other rappers who we used as inspirations for jerseys. It’s an all-star and rookie pairing of sorts that celebrates the bond between the artist and a city’s living, breathing culture.

The result is a pair of jerseys: one infused with the essence of a superstar rapper; the other, imbued with elements from a top emerging emcee poised to be a major player on the rap scene. 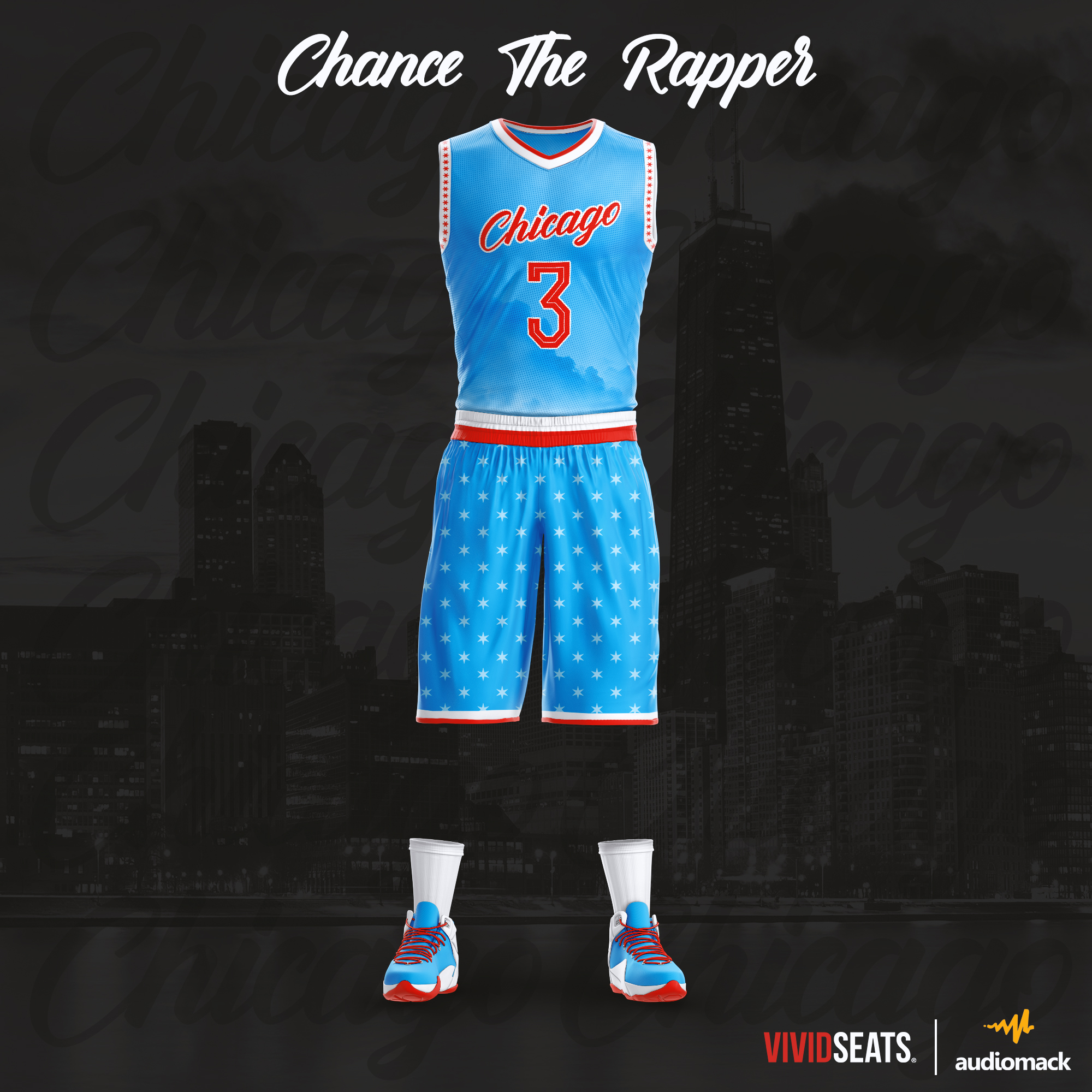 Chance the Rapper's jersey design is quintessential Chicago with obvious homages to the South Side native. The fabric pattern of the jersey top, with cumulus clouds, is inspired by Chance's debut mixtape, 10 Day. 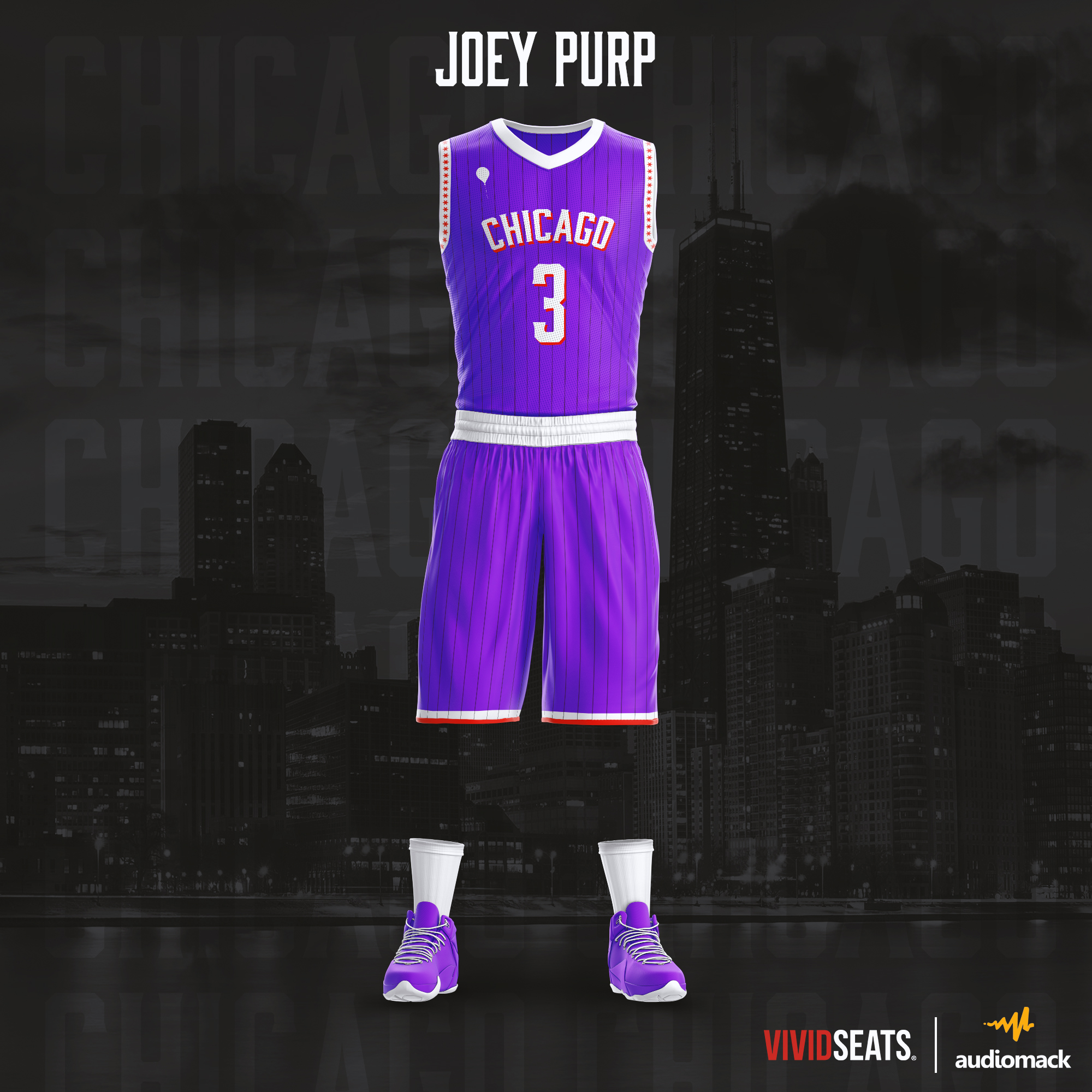 Joey Purp is a founding member of Savemoney, a Chicago hip hop collective. His debut project, The Purple Tape, introduced him to the Chicago rap scene in 2012. The lone balloon on the jersey calls to first Leather Corduroys studio album, Season.

Marcy-made Jay-Z, a member of any proverbial pantheon of the game’s greatest to ever do it, has deep ties to basketball, as a one-time part owner of the Brooklyn Nets. With the Brooklyn Bridge on the shorts, this uniform texture is inspired by the shirt Jay-Z wore last year’s hit, “Apeshit.” The marks on the shoulder strap call back to album cover for The Blueprint 3, the album that helped him break Elvis Presley's record for most No. 1 albums ever. 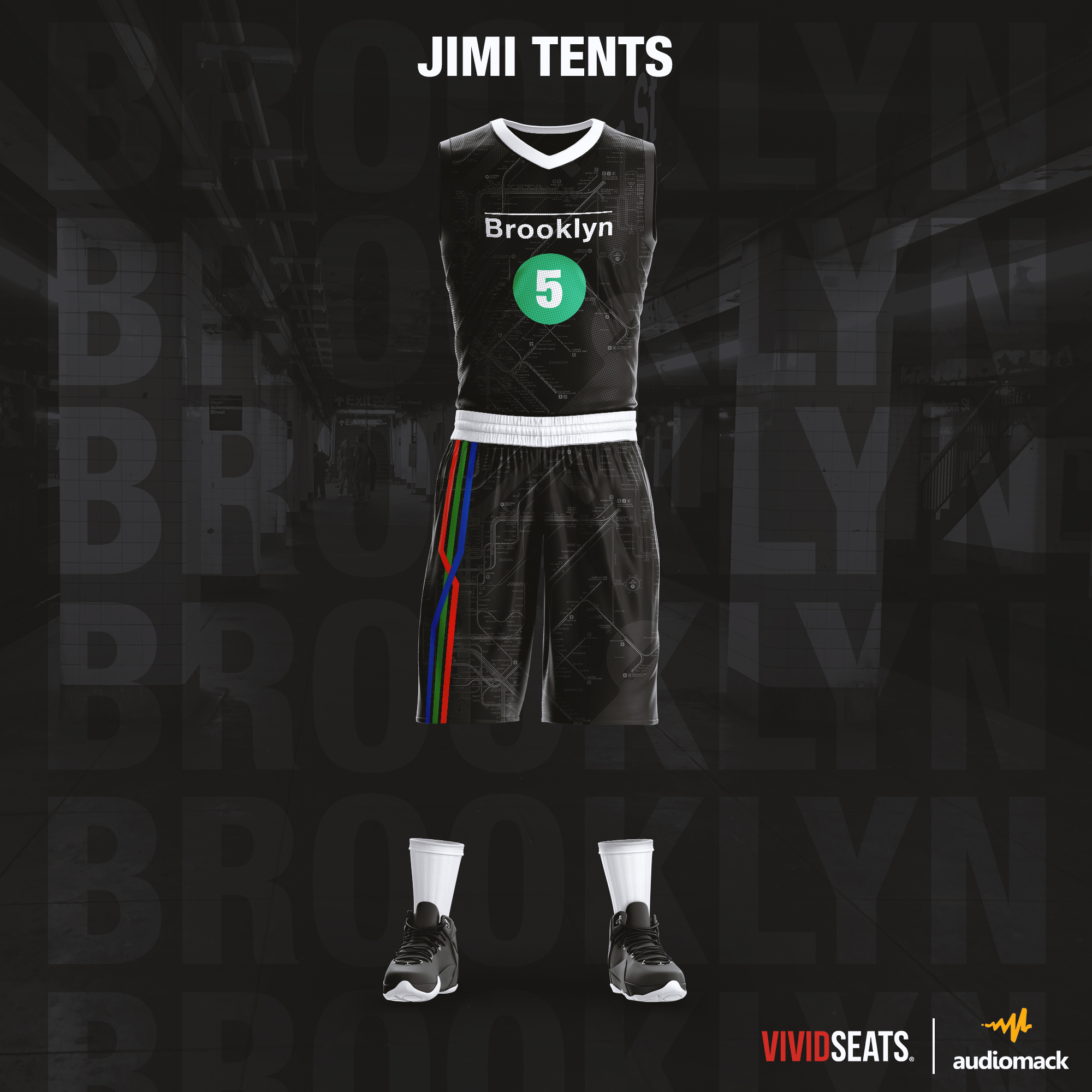 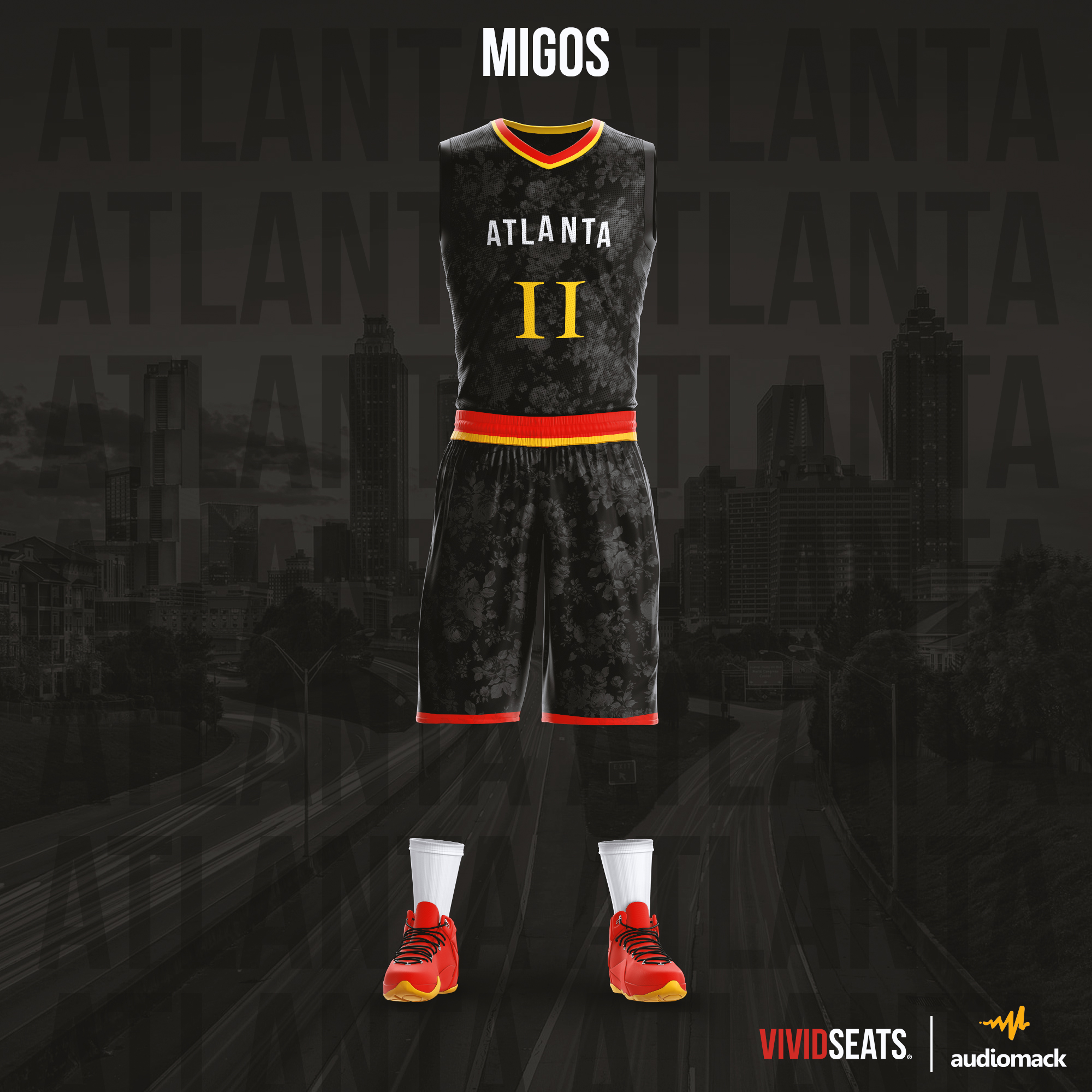 Migos enjoyed massive popularity in 2018, co-headlining a popular tour with Drake. The floral pattern on the jersey derives inspiration from the group's ostentatious fashion styles, while the uniform numbers are a callout to the cover for the group's hit album, Culture II. 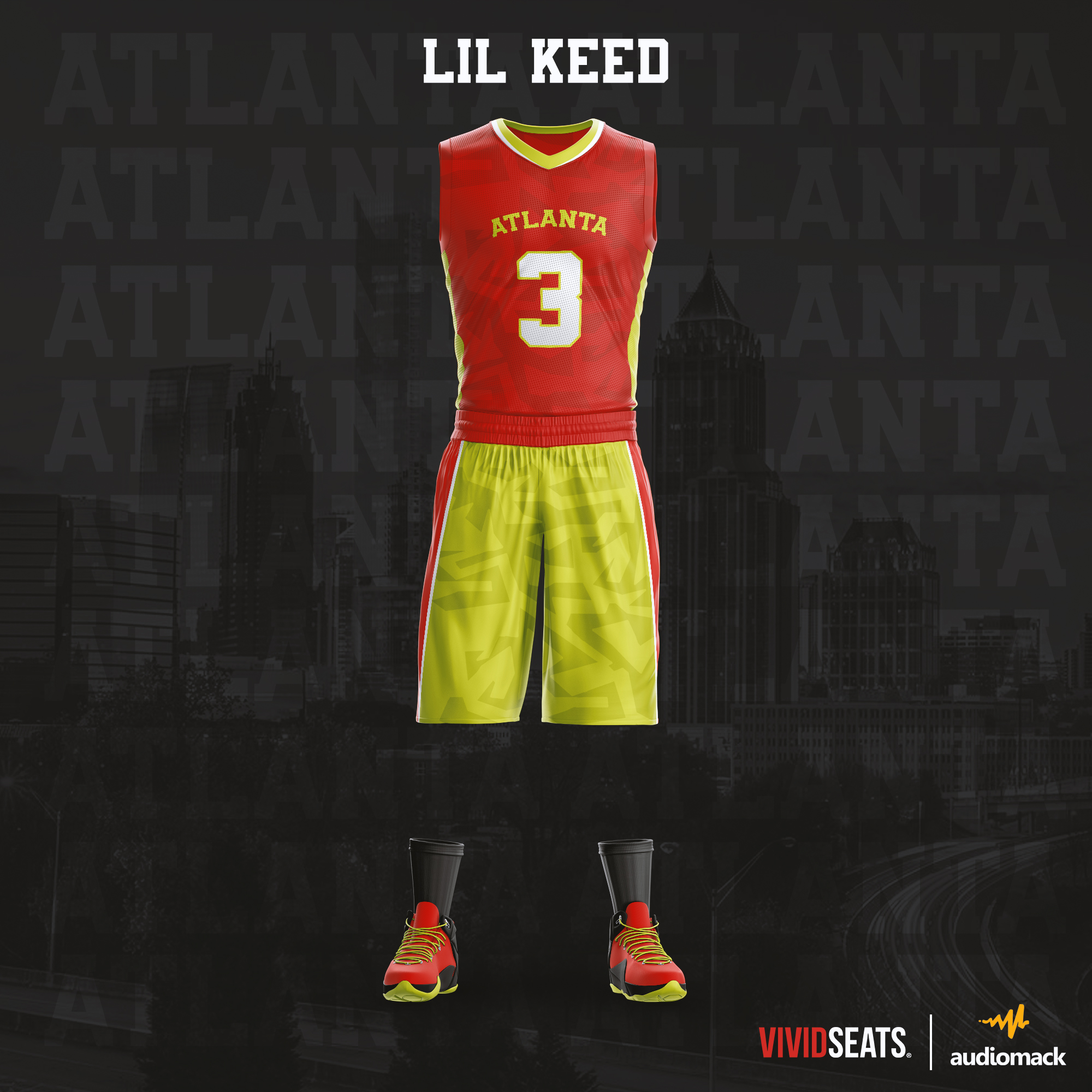 Bright, bold colors are hallmarks of Atlanta up-and-comer Lil Keed, who figures to follow in the footsteps of Lil Baby and Gunna as the next star to emerge from "The A." The pattern on the uniform pants is a nod to the graffiti on the wall of Keed's video "It's Up." 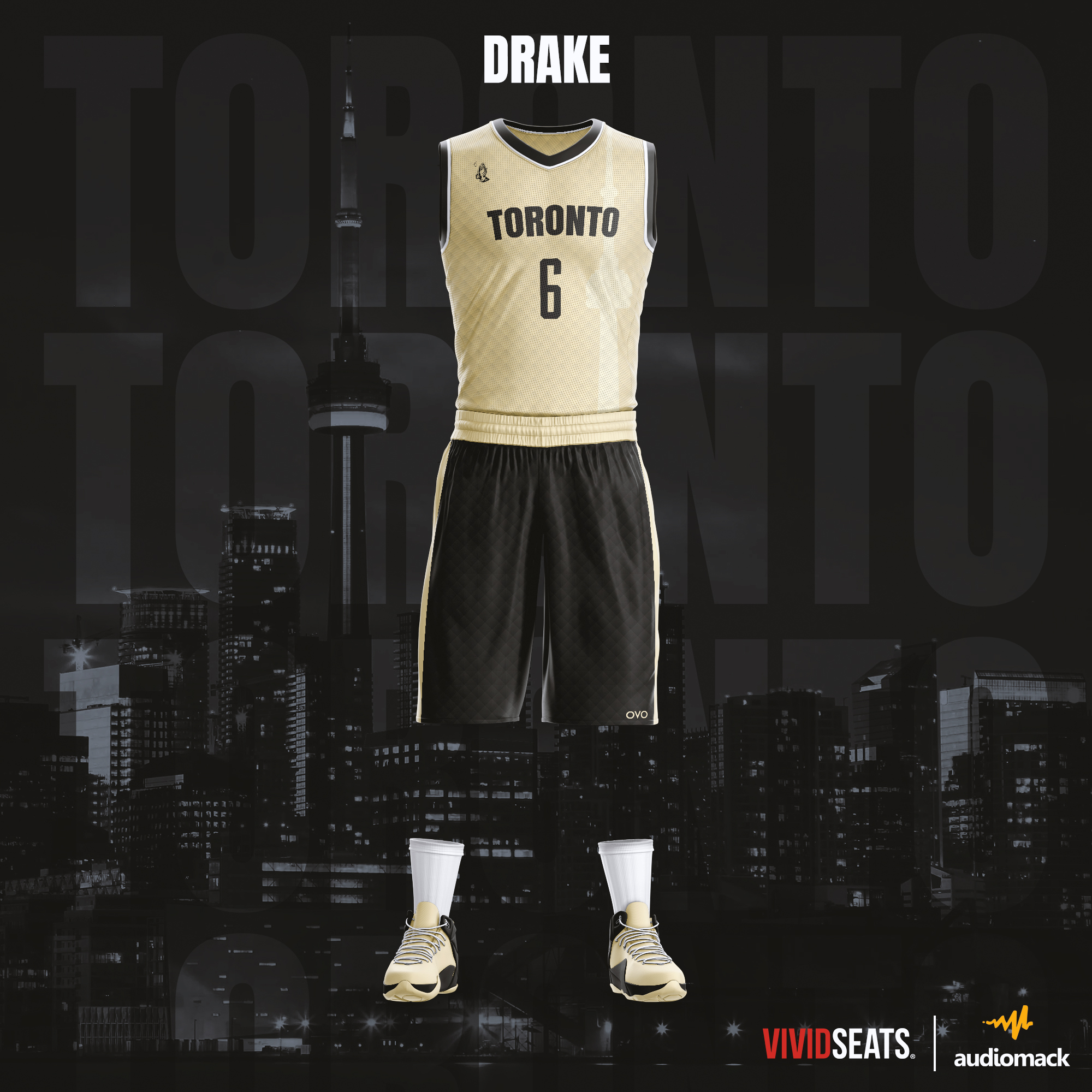 It's only right that our Toronto jersey features the number 6, since Drake helped bring that nickname for his hometown to the vernacular of most rap fans. The gold color is a favorite of his, and the prayer hands and owl eyes call to mind "God's Plan" and OVO, respectively. 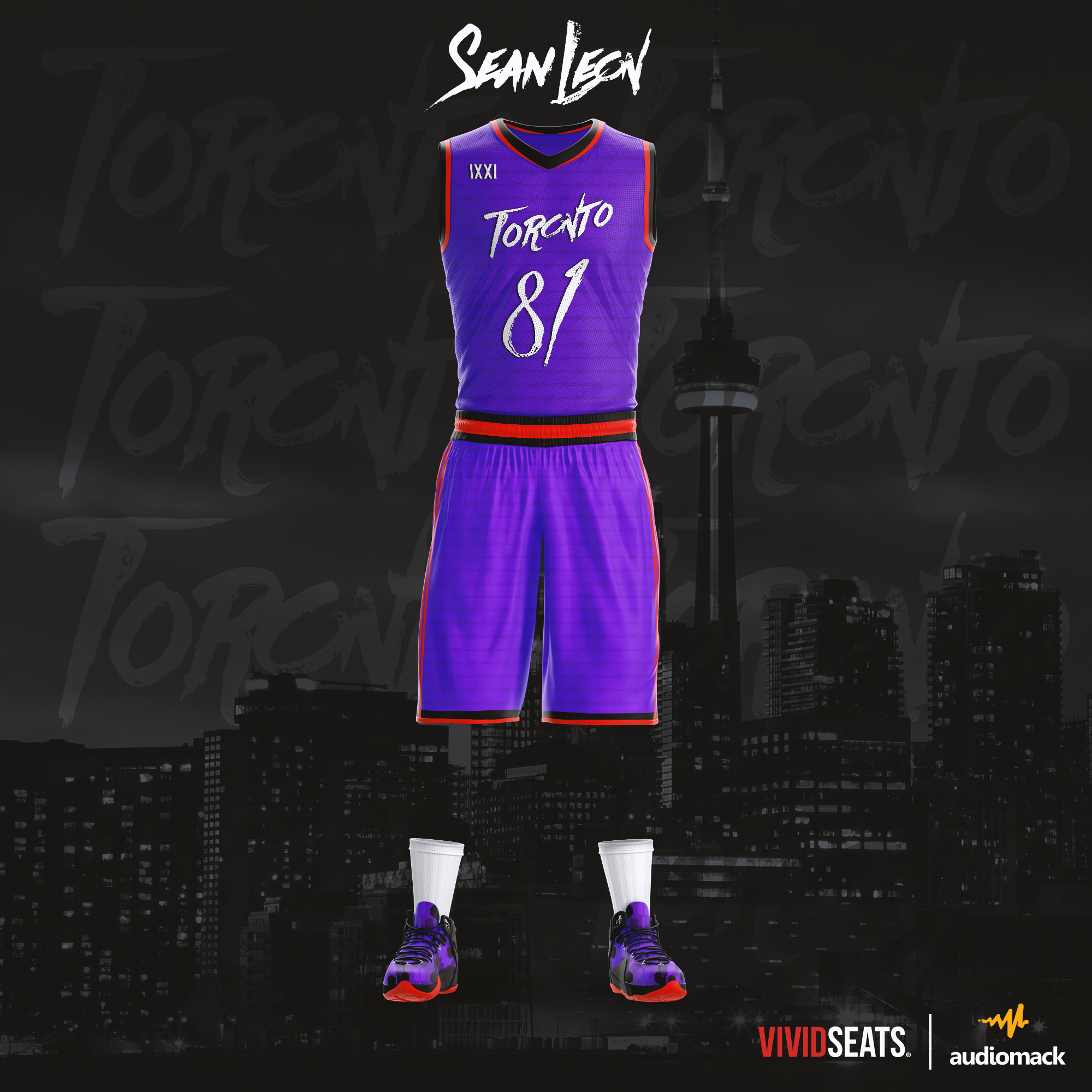 Drake helped the Toronto rap scene explode and now, Sean Leon is next in line. Leon penned "81" following Kobe Bryant's 81-point performance against the hometown Raptors. The links in the fabric of the jersey are a subtle reminder of the bracelets and chains he often wears. On the shoulder, the Roman numerals represent the rap collective Leon started. 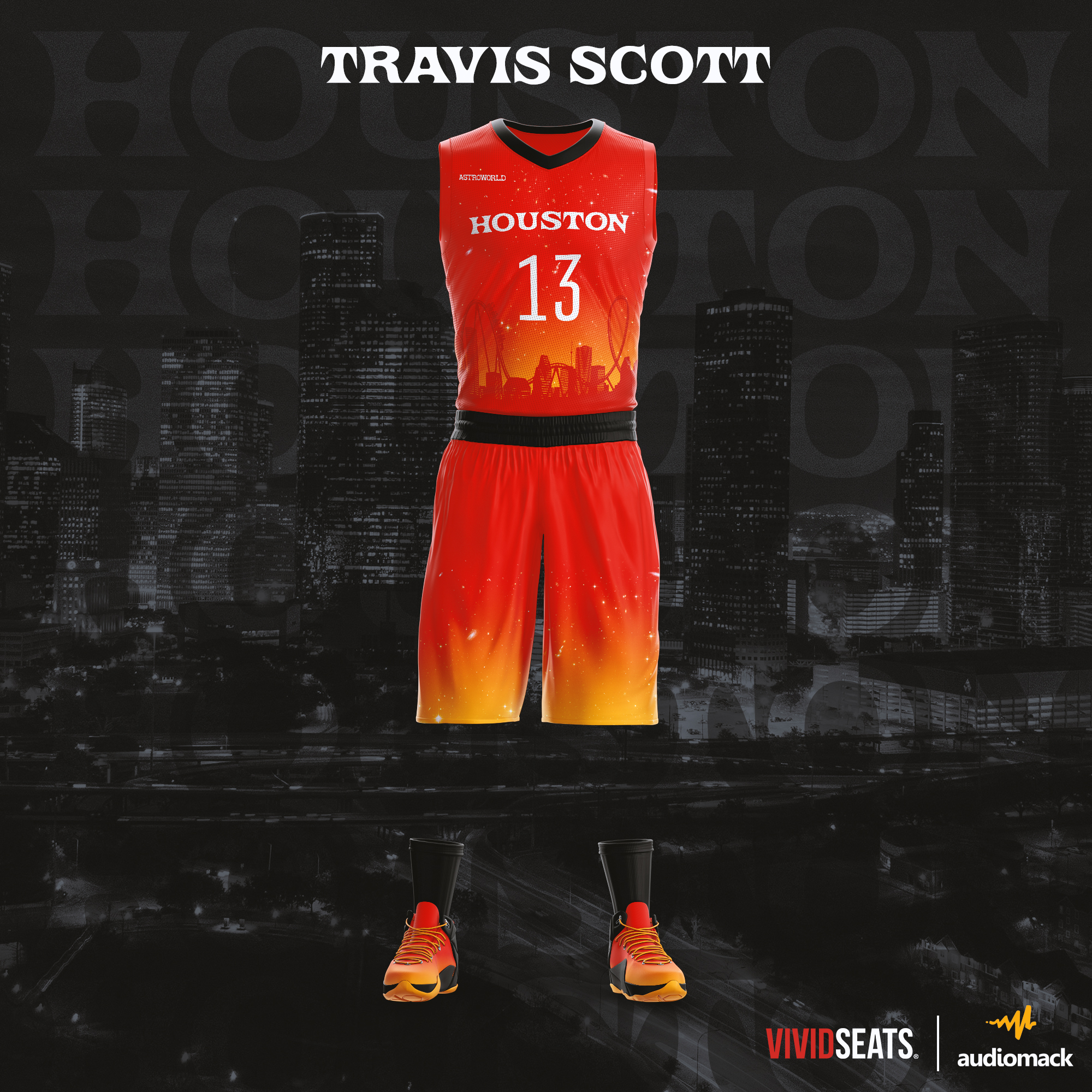 Perhaps no rapper has risen more rapidly over the last few years than Travis Scott, who enjoyed a massively popular tour and performed at halftime of the Super Bowl. Astroworld--Scott's hit album--is woven into this jersey throughout. 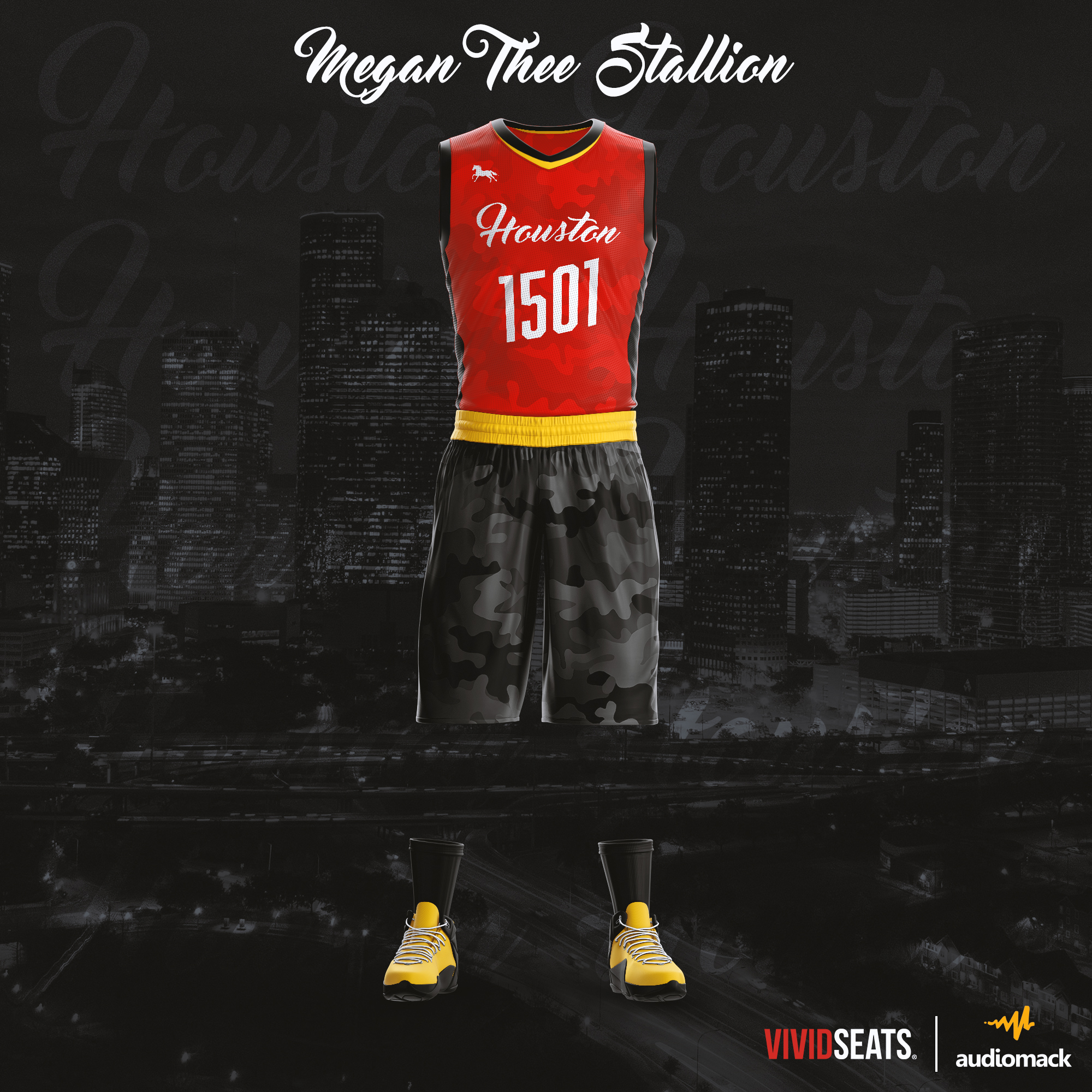 Female emcee Megan Thee Stallion of 300 Entertainment is bold, confident and poised to blow up in 2019. The red camo pattern is reflective of the outfit she wore during a photo shoot with Fader. The jersey number is drawn from 1501 Certified Entertainment, an independent Houston Label. 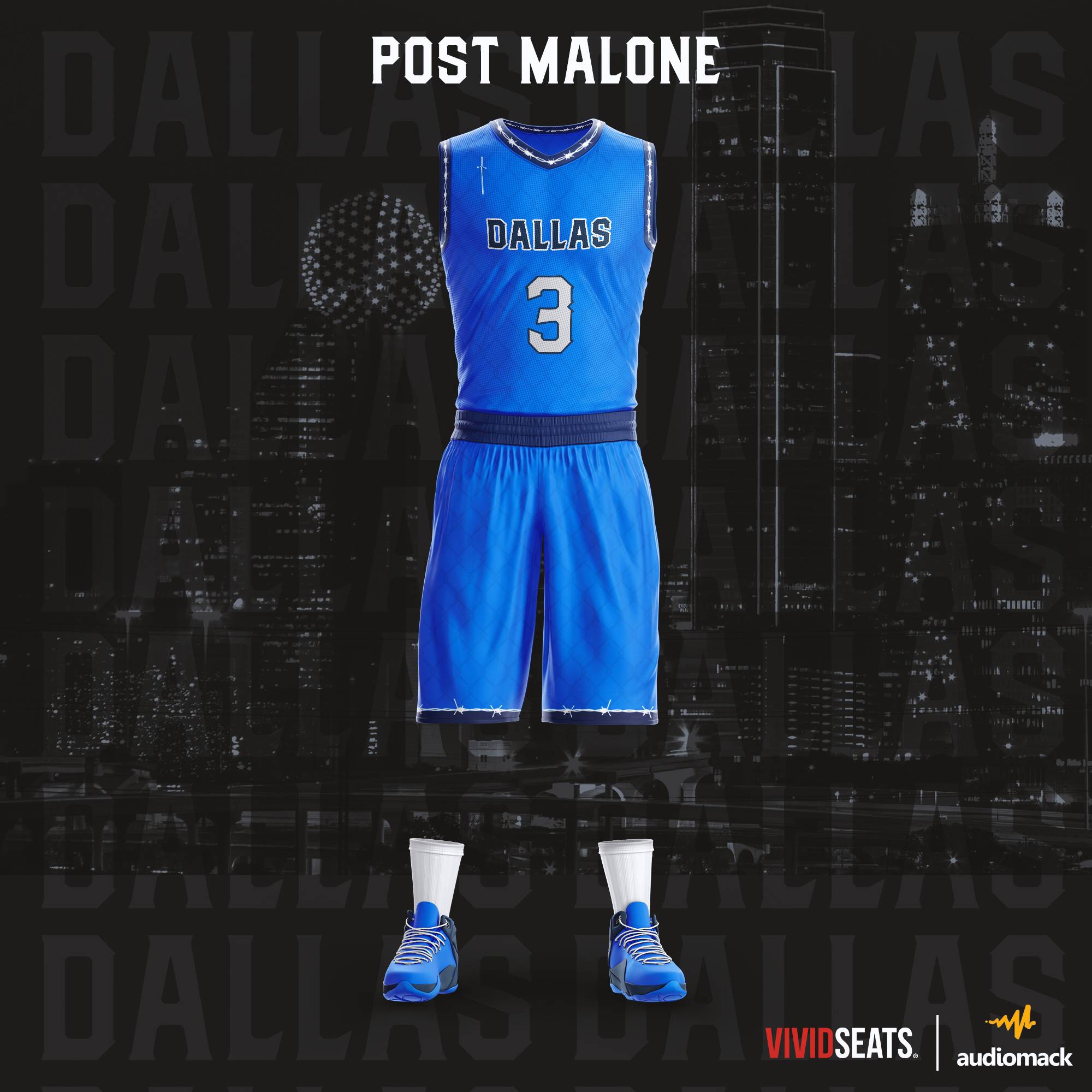 Post Malone's breakout song was an ode to Allen Iverson, perhaps as much to his iconic Question sneakers as to the man and athlete himself. The jersey is trimmed with the same barbed wire that outlines Malone's forehead. 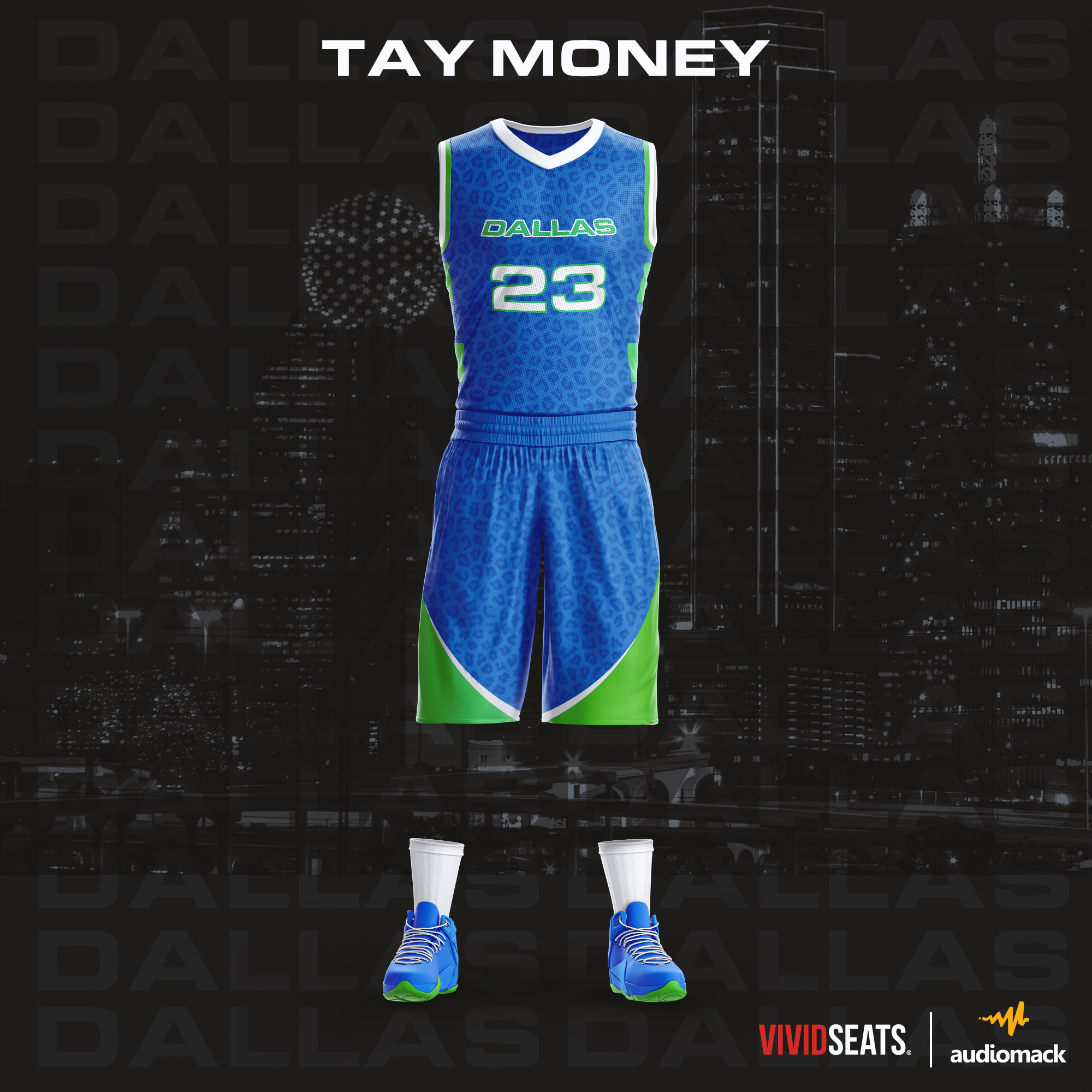 Tay Money possesses a one-of-a-kind, unapologetic style that has her selling out shows in her hometown of Dallas and fast-tracked for national rap stardom. The jersey reflects her feminine but in-your-face vibe. The bright neon trim is a hallmark of her style, from her clothes to her hair dye.