In 2019, K-pop is everywhere in the United States. The country's largest stadiums. The nation's most beloved television shows and award ceremonies. And, most notably, the cell phones of millions of Americans, of all ages, on Twitter feeds, in YouTube videos and on playlists of all sorts.

Most notable in the undeniable growth of K-pop is BTS, a seven-member band that has already accomplished musical feats previously held by some of the most well-established, uber-popular acts in American music, usually homegrown or imported from Great Britain.

BTS has enjoyed unparalleled success in the U.S., but other K-pop groups have also made a mark on America's music scene, and contributed to the K-pop frenzy that has dominated the first half of 2019.

Vivid Seats set out to explore the explosive growth of K-pop through the lens of ticket sales data, to illustrate the growth and current state of K-pop in the U.S.

From BigBang to BTS: The K-Pop Explosion

If 2019 is the year K-pop exploded in the U.S., 2015 was perhaps the initial spark, with BigBang serving as catalyst. The four-member K-pop pioneer preformed in Las Vegas, Los Angeles, Anaheim and Newark.

As evident in the video above, 2018 sees a deluge of K-pop buzz across the U.S., including a BTS performance at New York's Citi Field in October, leading into a 2019 that has been dominated by K-pop.

Here are the top-selling K-pop acts in the U.S.

The BTS Chicago Story: From Rosemont to Music Royalty

In May 2019, BTS performed at Soldier Field on consecutive nights, to sellout crowds of ravenous fans. Less than five years earlier, in 2015, they stood on stage at the cozy, intimate Rosemont Theatre, to little national fanfare and in front of just a few thousand fans.

In many ways, the journey of BTS through Chicago is a microcosm of the band's--and perhaps the genre's--rise overall. In just a few short years, BTS went from small venues and a small nucleus of core, decidated fans to the 2018 Vivid Seats Artist of the Year.

Follow the journey in the interactive map below, to re-trace the steps of BTS throughout Chicago. 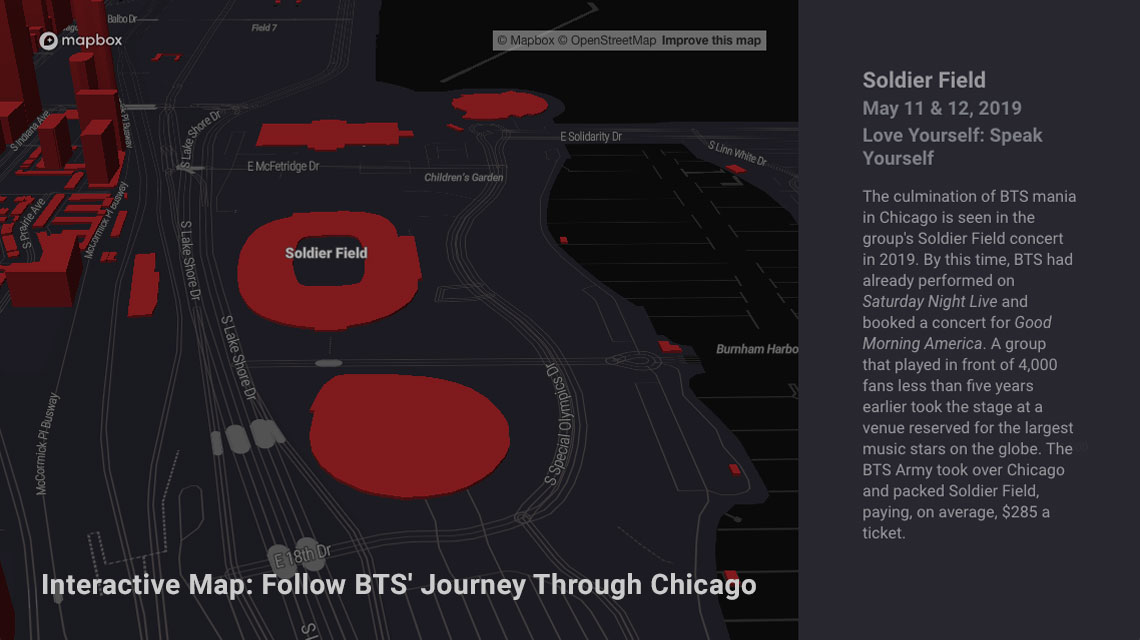 The Top Markets for K-Pop

K-pop is growing at different rates in various parts of the country. The below map depicts Vivid Seats site traffic to K-pop pages from different metropolitan areas, per capita.

Zoom in for a more detailed look at a given area.

While BTS may not be going on a full US tour in 2021, the K-pop band will perform four shows in Los Angeles at SoFi Stadium as part of the Permission to Dance on Stage series. BTS LA tickets are available now.

Top Events at Other Venues

If %venueName% isn't hosting the event you're hoping to catch, browse tickets to some of the most popular tours happening right now: