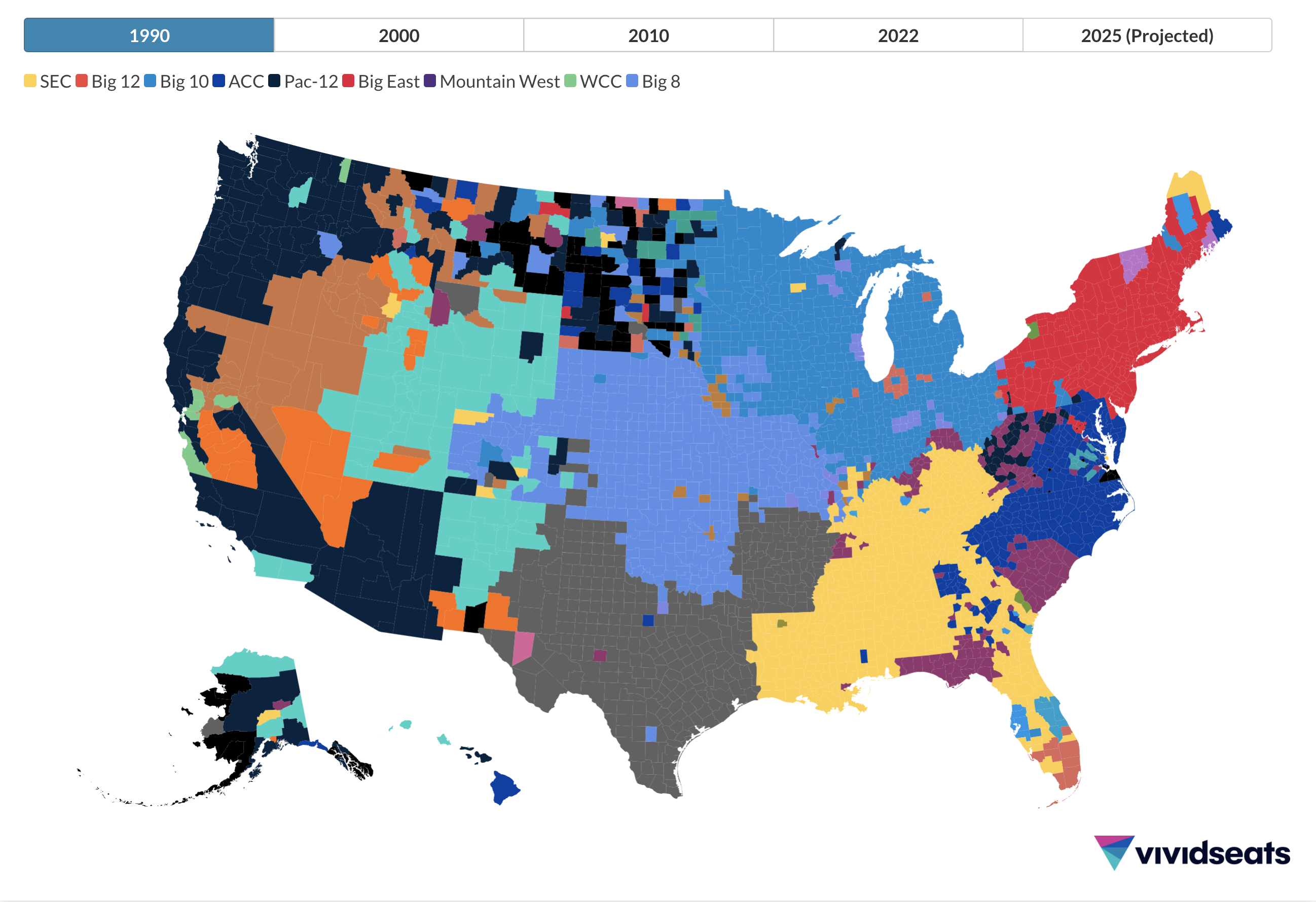 While the madness of the NCAA Basketball Tournament is a perfect way to end the men’s college basketball season, sometimes it has nothing on the conference realignment craziness of the offseason.

Vivid Seats has created an interactive map where fans can explore the ever-changing landscape of college athletics.

This map, powered by Vivid Seats sales data, highlights the most popular men’s college basketball team in each county, according to Vivid Seats historical sales data. The map then showcases how conference alignment has shifted over the past 30+ seasons, as conferences compete for athletic supremacy.

Growth of SEC Shows No Signs of Slowing

The SEC's expansion has fueled significant growth. The football-crazed conference, which claimed 564 counties in 1990, now lays claim to 835 counties. In 2025, with the addition to Texas and Oklahoma, its footprint will extend to 932 counties, nearly one-third of all U.S. counties.

Here’s a breakdown of conferences claiming the most counties in 2022:

Smaller conferences have seen their footprint decrease as top teams have moved to larger conferences. The WAC has been hardest hit, losing Utah and BYU since 1990, causing a 92% drop in counties where the conference claimed the most popular team.

With a large share of counties in densely populated metropolitan areas like New York City, Chicago and Philadelphia, the Big East controls the largest share of population on the map.

Despite having a fraction of the counties that the SEC and Big Ten enjoy, the population reach of the Big East is double either of those conferences.

The ACC has enjoyed a +49% in overall population reach since 2000, thanks to the additions of Boston College, Miami, Syracuse, Pitt and Notre Dame.

When it comes to total land size, no conference has a stronger footing than the Pac-12, which dominates most of the West Coast.

With a strong presence in Nevada, Idaho and New Mexico, the Mountain West Conference cracks the Top 5:

Explore the interactive map below:

March Madness 2022: Schedule, How to Watch and Tickets

Map: The Most Popular NCAA College Basketball Teams by County