Each spring, March Madness takes over the country, and if you’ve never experienced a Final Four or national championship game live, we’ve got some great news for you.

Our exclusive What it Costs to See a Champion Study uncovered the prices fans pay to witness a slice of history across numerous sports, and as it turns out, college basketball is one of the most affordable.

*Since 2012, college basketball national championship games have the cheapest average prices for sold tickets year over year compared to the other sports in the study

*Combined average price on sold tickets from 2012-16 was $290, the lowest of all sports included in the study 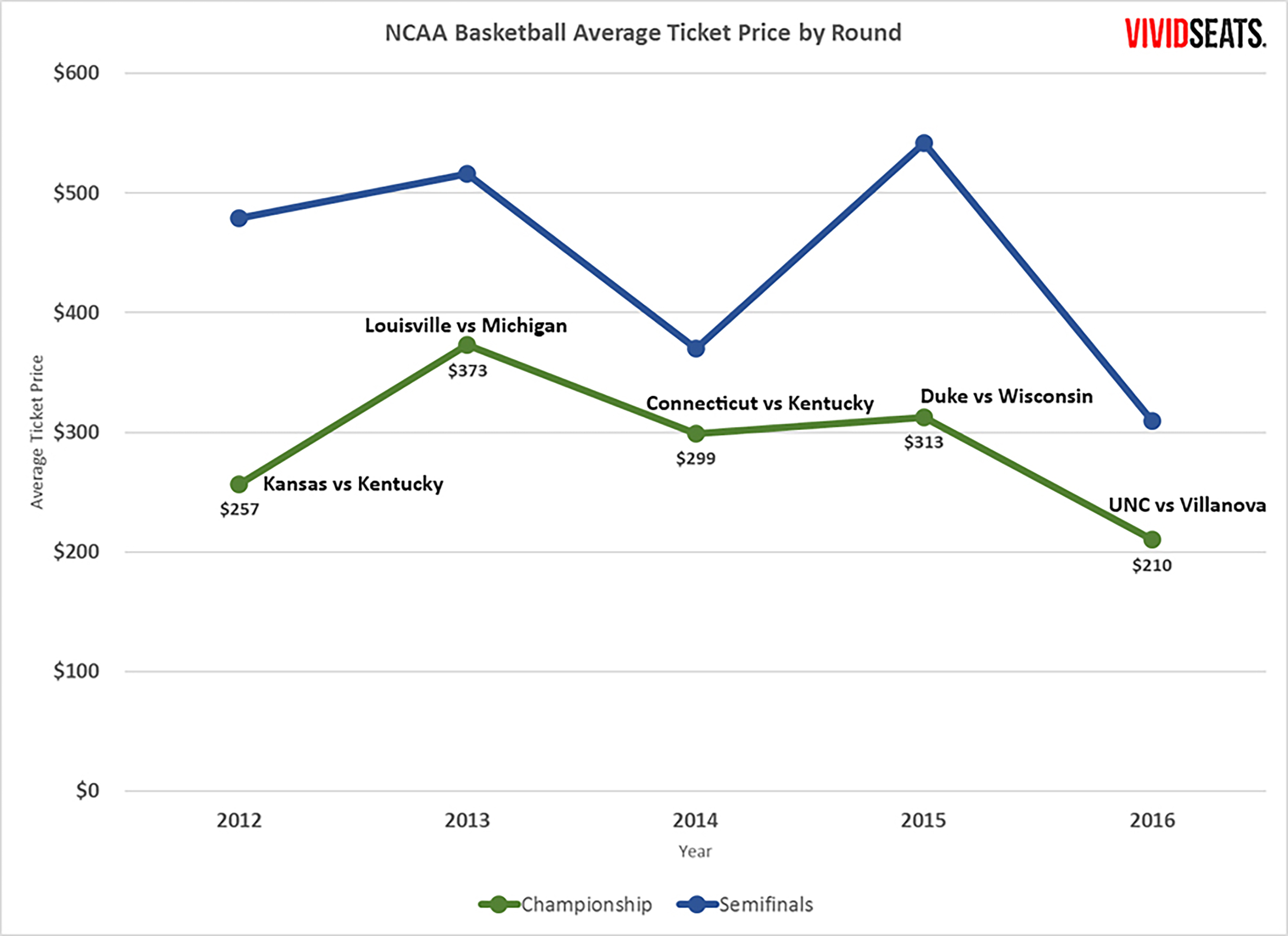 Embed our Final Four Ticket Trends Chart on your own site by copying the code below:

One look at the chart and it’s clear – national championship matchups like Louisville/Michigan and Duke/Wisconsin are the kind college basketball fans want to see. But what makes them stand out?

The Case for Louisville vs Michigan

Well, for starters, Michigan hadn’t advanced to a Final Four or national championship game since 1993, and the famously vast and widespread fan base surely comprised a large portion of the 74,000-plus in attendance at the Georgia Dome.

On the flip side, Louisville had just been in the Final Four the previous year, but had failed to reach the national championship game. With the subsequent advancement in 2013, fans had the extra incentive to come watch the Cardinals ultimately claim the program’s first title since 1986.

The Case for Duke vs Wisconsin

With the rare opportunity to watch four perennial powerhouses - led by some of college basketball’s most successful coaches ever no less - all in action during a single day, the average selling price of Final Four tickets ($542) almost seems like a steal.

It was ultimately Duke and Wisconsin that prevailed, and each offered up incentives to attend the title game. Duke head coach Mike Krzyzewski was attempting to secure a fifth national championship, while the Badgers were seeking their first title since 1941. So, no matter who you rooted for, you were guaranteed to witness a piece of college basketball history.

With an average selling price of $210, the 2016 National Championship Game was the lowest of those included in the study. Individually, the participating teams – North Carolina and Villanova – are considered two of college basketball’s most prominent programs, but head-to-head, there isn’t much notable history. Entering the game, they had met six times previously in the NCAA Tournament, but just 16 times overall.

Media hype is important to consider as well, but it’s tough to drive up any rivalry momentum if there isn’t much of one to begin with.

Considering the previous point, it’s perhaps surprising that the 74,340 in attendance at NRG Stadium for the 2016 National Championship Game made it the second-highest ever, behind only the 79,238 who packed into AT&T Stadium in 2014.

Or, maybe it’s not so surprising after all. Most often, higher priced things are considered to be of more importance, more popular, higher in demand, etc. But that may not necessarily be the case for all live events, with things like attendance and venue capacity to consider.

Supply and Demand Takes Over

When there are a lot of tickets available, prices are generally lower. That’s just supply and demand. Converted football stadiums usually boast higher seating capacities, thus having more tickets to offer, and more room for fans to attend. Therefore, average ticket prices are spread across more tickets, increasing the likelihood of a lower price when all is said and done.

Regardless of the school, it likely has fans situated all around the world, though not necessarily evenly distributed.

At each year’s Final Four, there’s a hearty mix of locals plus fans that make the trek. Just out of curiosity, we took a look at what Google Maps says the shortest driving distances are from the campus of the national championship teams to their respective host venues:

While most fans may be more likely to fly than drive, the average college student tends to go with the cheapest option possible. So while 2016’s title game may have had the second-highest attendance ever, the participating schools were both located over 1,000 miles away, making it likely that it was a lot of locals buying up tickets and likely because they were reasonably priced. Then again, it’s also possible that many fans traveled regardless of the distance, but then had to shop for tickets on a budget due to travel costs.

Meanwhile, the two games with the highest average prices featured teams much closer to the host sites, making it possible that those games were attended by fans of the schools that were willing to pay higher prices to see the contest live. They also may have had more money available for tickets being in closer proximity and having driving as more of an option than in other cases.

5. The Novelty Wears Off

It may be no coincidence that Kentucky was involved in two of the three lowest priced national championship games. The Wildcats advanced to three Final Fours in five years, prevailing only in 2012.

Though the hype around March Madness may always seem high, it’s possible frequent return trips can ultimately drive down Final Four ticket prices because of the cost incurred by fans trying to attend each and every time, or if fans opt not to attend entirely.

March Madness 2022: Schedule, How to Watch and Tickets

Map: The Most Popular NCAA College Basketball Teams by County