Long before players sprint onto the field on Sunday to the roar of the home crowd, they are prospects, vying to be selected in the NFL Draft.

Indeed, the foundation of a successful team in the fall is laid in the spring through savvy player evaluation and drafting.

Vivid Seats analyzed 10 years (2010-2019) of NFL Draft data to explore and visualize various player draft trends: which colleges and conferences produce the most picks and which positions and college conferences NFL teams seem to invest most capital in.

View each chart and tour the interactive versions of the visualizations below. 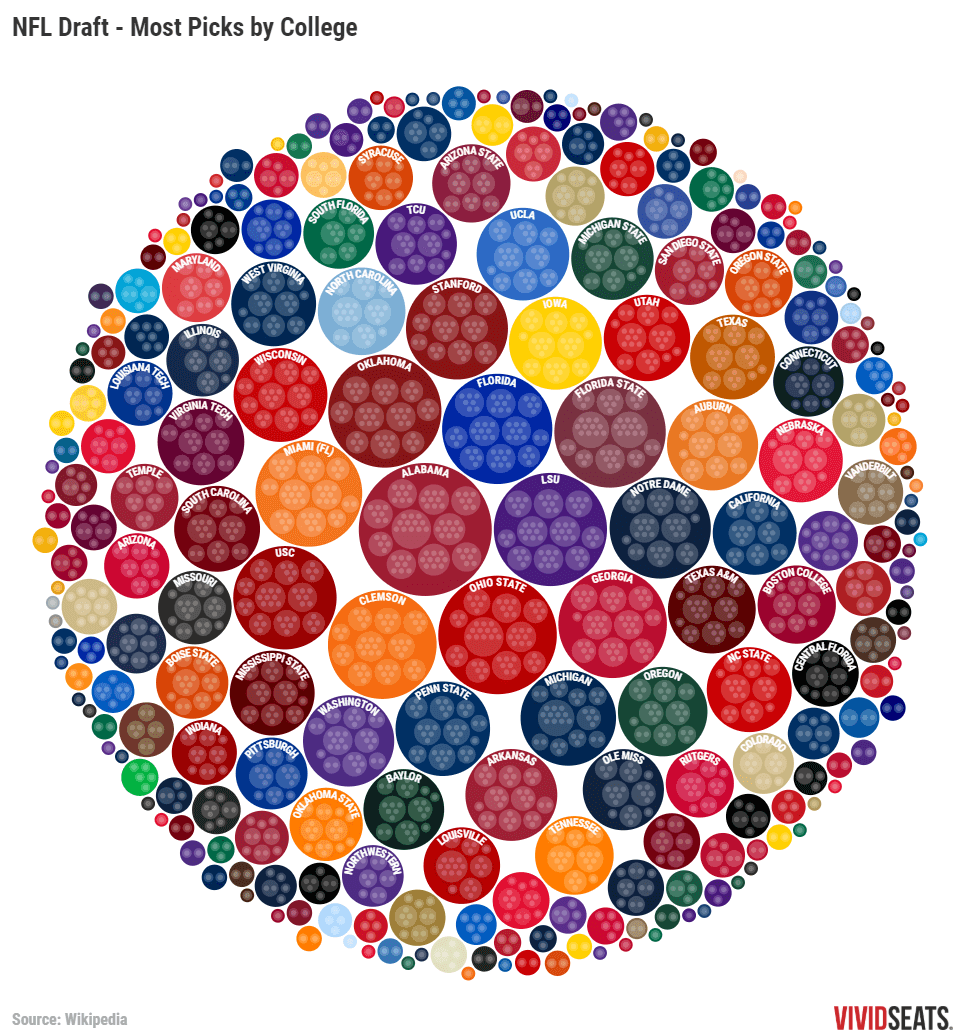 Alabama is the clear leader, but other schools have had remarkable single-season production of draft picks. Ohio State produced 12 picks in 2016, while Florida State claimed 11 in 2013 and 2015. North Carolina produced nine picks in 2011.

It's not always about wins. Some colleges, like Rutgers, Northwestern, Arkansas, Mizzou, Vanderbilt, UConn and Illinois have produced plenty of pros despite not being accustomed to New Year’s Six bowl games.

San Diego State punches above its weight class, making it into the “inner ring” of colleges production picks. The school produced first-round pick Rashaad Penny in 2018. 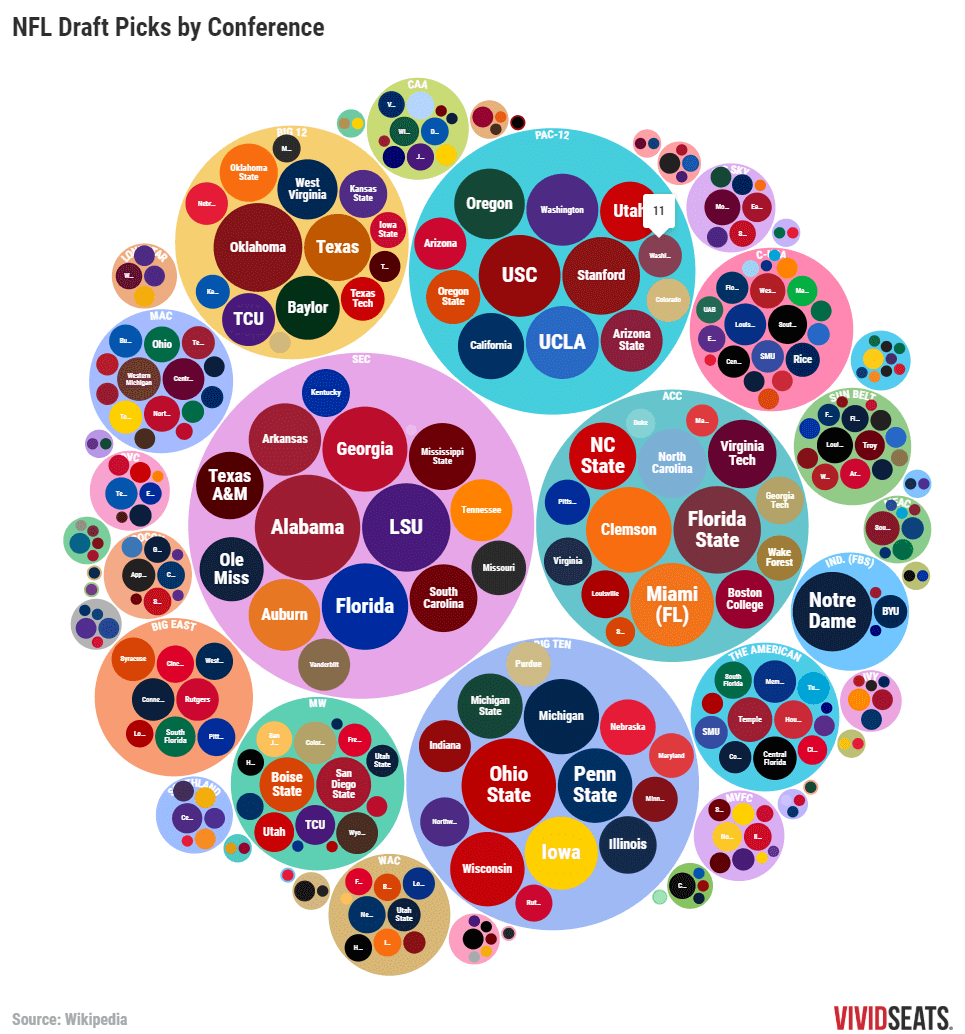 The SEC clearly dominates, but the Pac-12's production of NFL Draft selections is rather impressive. Though the conference has struggled to produce College Football Playoff-qualifying teams, it has outproduced the Big 12--often represented in the Playoff--in overall draft picks.

MACtion is real. The MAC has produced 66 picks over the last 10 years, close behind the Big East (71). Western Michigan leads the way, producing multiple selections in four different years. 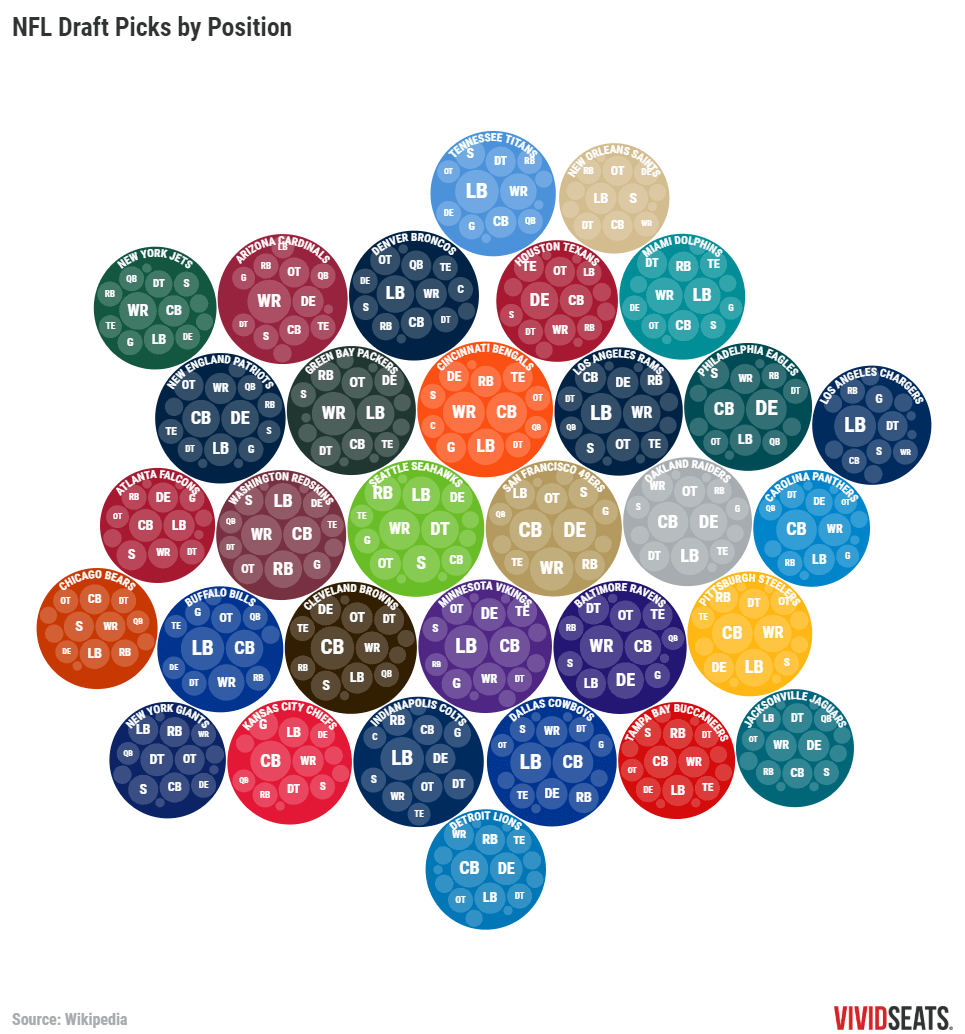 Overall, teams appear to be investing significant draft capital on cornerbacks, perhaps a testament to the pass-happy state of the modern NFL and the need to defend players on the perimeter.

The San Francisco 49ers have invested heavily in defensive end selections. It paid off last year, as the team road a dominant defense (led by No. 2 overall pick Nick Bosa, a defensive end) to the Super Bowl.

The Chicago Bears have had one of the more well-balanced collection of draft picks, with near equal selections of safeties (8), linebackers (7), wide receivers (7), cornerbacks (7), running backs (6) and defensive tackles (6). 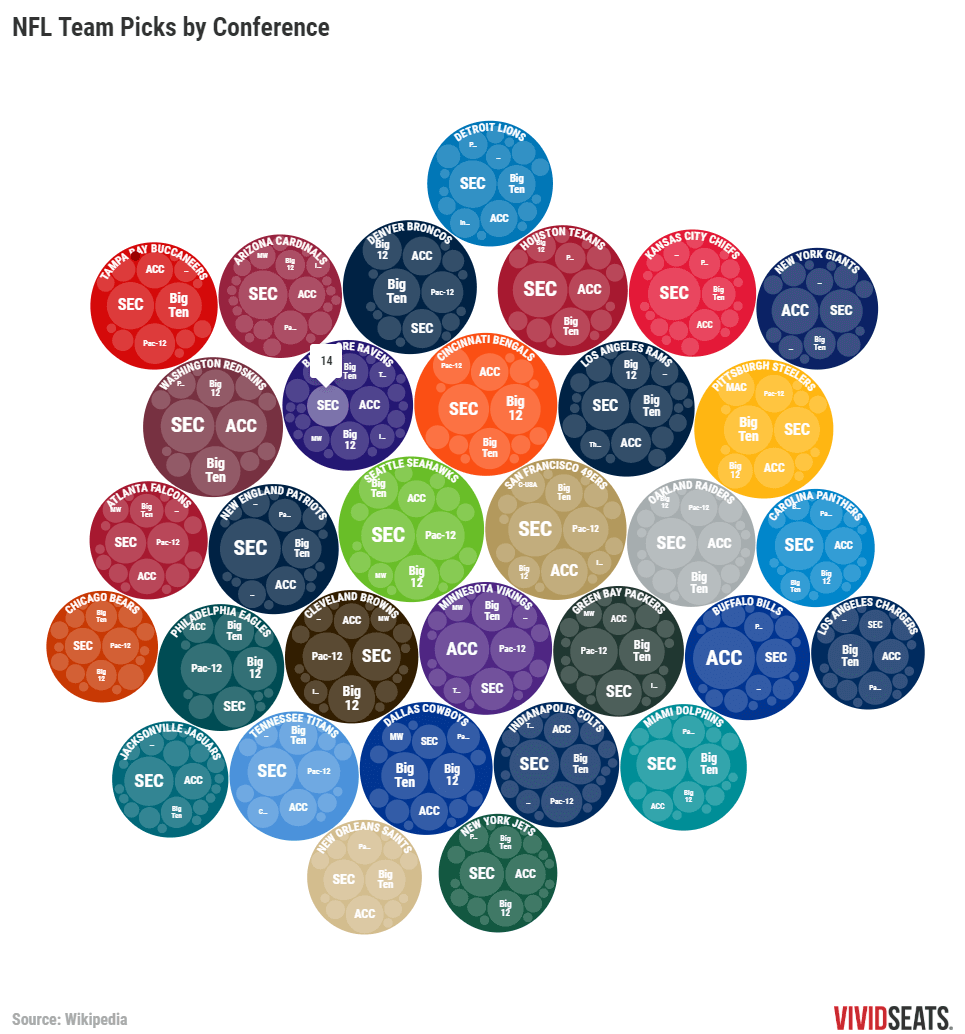 There seems to be evidence of some teams displaying a geographical preferences toward conferences located in their own backyard. The Cowboys are have a high exposure to Big 12 draft picks; the Seahawks have one of the highest shares of Pac-12 selections. The Pittsburgh Steelers have drafted as many players from the Big 10 as the SEC.

Explore the charts and dive deep into the data through our interactive visualizations below:

Notes on the data

A school’s conference is determined by which conference it was in during a given draft, not retroactively fitted to its current conference.