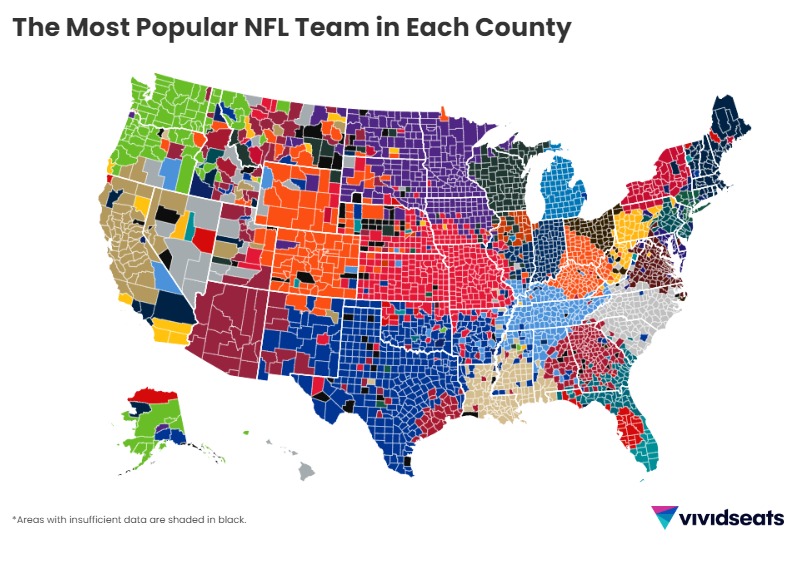 From Raiders Nation to Bills Mafia, America loves its football and the fan bases that go along with it.

While spending a day at the field, cheering for one’s favorite team, is a sports ritual that remains strong, different teams are more popular from one region to the next.

As the football season is set to kick off, Vivid Seats explores America’s rooting interests by identifying the most popular NFL team in each county.

To find the top NFL team in your county, according to 2022 Vivid Seats ticket data, view the interactive map below:

The Cowboys have a unique history cultivating a fan base: Their introductions on broadcasts as “America’s Team” in the late 70s and early 80s helped them foster a fan base across the country.

Their storied history—coupled with their eight Super Bowl appearances in the late 20th century—leaves the Cowboys as the most popular NFL team in the country.

In total, 360 counties favor the Cowboys. The Cowboys dominate the Texans across the Lone Star State and have strong claims to territory in Oklahoma, Arkansas, New Mexico, as well as Louisiana parishes near the border.

Since the Raiders made their debut at Allegiant Stadium in 2020, the Sagebrush State is a lot more silver and black.

However, the 49ers haven’t lost their hold over the western part of Nevada. The Raiders have the strongest footing in the state, with the Steelers, Dolphins and Bucs also claiming counties.

The counties making up Idaho, Montana and Utah have an eclectic NFL rooting interest (and no NFL team of its own).

Take Lemhi County in Idaho, for example. The top team there? The Las Vegas Raiders. To its immediate west, Valley County favors the Philadelphia Eagles. These are sparsely populated counties, located a flight away from major NFL franchises. No team has a particularly strong foundation of support.

The Cleveland Browns have typically been the “dominant” fan base in Ohio.

In 2022, that statement still rings true. Forty-eight counties in Ohio root for the Browns and 39 counties root for the Bengals. The only county in Ohio that isn’t either pro-Browns or pro-Bengals? It’s Jefferson County, whose allegiances stand with the Pittsburgh Steelers 47 miles away.

Are there any other fan bases that are as sharply divided as the Browns-Bengals in Ohio? A close second might be the divide between Steelers and Eagles fans in Pennsylvania.

Buy NFL Tickets and Get Rewarded

Every time you shop for NFL tickets, you’ll earn Rewards Credit with Vivid Seats Rewards. Buy 10 tickets, get the 11th on us.*