From the Blog: Brooks Atkinson Theatre: Seating Guide for Waitress and Other Broadway Shows

New York’s Brooks Atkinson Theatre first opened in 1926, and nearly a century later this Broadway theater is still going strong as one of the city’s top venues for live entertainment. The enduring theater has been the site of several acclaimed productions over the years, among them classics like Death and the Maiden, Spring Awakening, Rock of Ages, and Waitress.

There are three distinct levels of seating on the Brooks Atkinson Theatre seating chart, beginning with the Orchestra on the main floor. There is also a large balcony that features a Front and a Rear Mezzanine Level. The Orchestra and Front Mezzanine are each divided into three sections--Left, Center, and Right--while the Rear Mezzanine has four sections across the theater. In addition to these three main levels, each side of the theater holds three private boxes that are available for most performances. 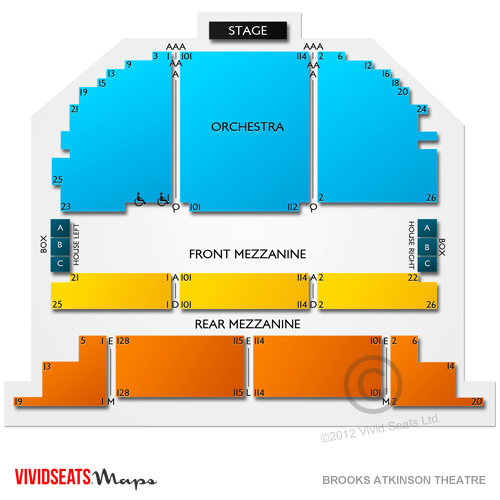 If you’re hoping to get as close to the stage as possible, the Orchestra Level is where you’ll want to look for seats. The rows in this level run from the front of the stage to the rear of the house, so the entire main floor offers seating for guests. For an unbeatable live experience, check out seats in the first few rows of Orchestra Center. You’ll have a direct view of the stage and the performance from these seats.

The seats in the more central rows and section of the Orchestra Level are also a hot commodity for live theater. Situated at an ideal distance from the stage, you’ll be able to take in the full show comfortably from these seats, considered by many to be the best in the theater.

Even in the rear Orchestra seats, your seats will be fairly close to the stage, and so your view of the performance should be direct.

The seats available in the Center section of the Front Mezzanine are an excellent choice for theatergoers who enjoy watching shows from above the level of the stage. Centrally located in the venue, these seats will give you the most direct view of any seats in this level. Since the seats are also on the lower half of the Mezzanine Level, you’ll be closer to the stage and have a more direct view.

As in the Orchestra, seats on the far sides of the Front Mezzanine will not give you such a direct view of the stage as those in the central sections, and occasionally some of the action during the performance can be blocked by the sides of the stage. Usually this won’t impede your enjoyment of the show, since the majority of the important action will most often take place at the front of the stage.

The last seating option on the Brooks Atkinson Theatre seating chart is the Rear Mezzanine. This level is farthest back and highest up in the theater, so it’s not a great choice for fans who want to feel in the middle of the performance. However, if you just want to get in the house to see the show, these seats will let you experience live theater firsthand.

Although the boxes at Brooks Atkinson Theatre are available less often, these seats offer a unique way to experience Broadway theater. From an elevated level with no one in front of you, you’ll have an incredible view of the stage. Do note that since you’ll be seated on the sides of the theater, some parts of the stage may be blocked by on-stage equipment or the stage itself.