Levi's Stadium Ticket Information Completed in time for the San Francisco 49ers’ 2014 season, Levi’s Stadium is state-of-the-art all the way through, featuring a wealth of technologically advanced features that immediately made it one of the best in the NFL. However, the venue was constructed with other events in mind as well, and also boasts the ability to host concerts, soccer, college football, extreme sports, and other special events, like Red Hot Chili Peppers Santa Clara, Coldplay Santa Clara, The Weeknd Santa Clara and Elton John Santa Clara. Additionally, even before its official opening, Levi’s Stadium was awarded historic Super Bowl L, the first such event to take place at the site. Check out the schedule on this page to see what will be headed to town next and make sure to reserve your spot in the stands with a purchase of Levi’s Stadium tickets from Vivid Seats. Streamline your search with the help of various on-page filters that can be used to sort listings by criteria such as month, category, and event. Press the corresponding red “Tickets” button to continue on with the quick and easy online checkout process. Fully trained Vivid Seats team members are available every step of the way should you need help choosing Levi’s Stadium tickets or would like assistance placing an order. Simply connect via Live Chat or call 866.848.8499.

Levi's Stadium Seating Information Due to the multi-purpose nature of the venue, the Levi’s Stadium seating chart may be adjusted to accommodate various events. To ensure you’re aware of the correct layout for the date you’ll be visiting the venue, peruse the respective map for your event to view its arrangement. In general, Levi’s Stadium seating is comprised of 100-400 levels on one side of the building, with the opposite side featuring just 100 and 200 level sections.

Since its opening in 2014, Levi's Stadium in Santa Clara, Calif., has filled the 49ers’ offseason with concerts from a range of high-profile musicians including BTS, Kenny Chesney, Taylor Swift, Grateful Dead, Beyonce, Coldplay, U2, and more. Next time you want to see a concert at this state-of-the-art Bay Area stadium, use the guide below to compare the seating views for different areas of the venue.

Levi's Stadium concerts typically offer five levels of seating, including the four main levels of the stadium bowl as well as options placed directly on the field. Standard Levi's Stadium seating capacity stands at just over 68,000, but some concerts at the venue have accommodated more than 80,000 attendees. Each performance will have a unique setup as per the artists’ instructions, but the general views during performances are fairly standard across the board. 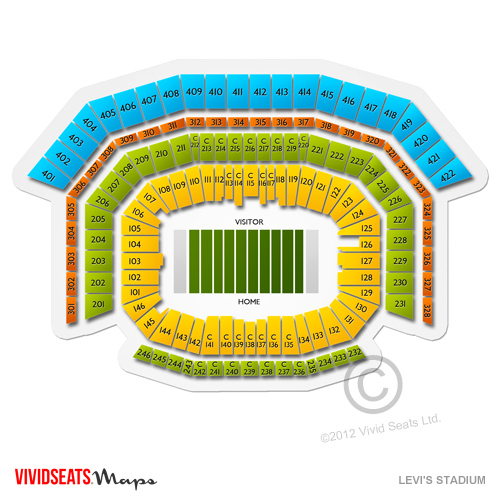 Some performers will choose to offer a general admission Pit area immediately in front of the stage. Usually this only includes standing room, but it gives you the chance to get much closer to the stage and the performers.

Farther back on the field, there may be additional reserved seating that will also be set up on the same level as the stage. Though these options are farther away from the Pit, they offer a unique concert experience that inserts you right into the middle of all the action.

If you want to be close to the stage but still within the main seating bowl, you should look to Levi's Stadium 100 Level. This is the only seating area that wraps completely around the field, so seats are available at nearly every angle to the stage, no matter your preference.

Next up is the 200 Level, which surrounds most of the field at Levi's Stadium. These seats stand at about the midway point of the venue, so fans in this level are relatively close to performers while still enjoying a more complete view of the full stage and concert.

Finally, the 400 Level will offer the last seating options for Levi's Stadium concerts. This level is only available to one side of the stadium, so most views of the stage and concert will be slightly off to the side. However, the bird’s-eye view of the show is unbeatable.