Battle of the Bands

Formerly known as Reliant Stadium, the state-of-the-art NRG Stadium is one of the most dynamic and flexible venues in the country. It’s unique fabric retractable roof was the first of its kind in the NFL, and with its seating capacity of over 70,000, NRG Stadium is able to host a multitude of sports and music fans year round. It serves as home to both the NFL’s Houston Texans the Houston Rodeo, and in the past, has hosted the Super Bowl, WrestleMania, and Final Four. NRG is also home to many great shows, such as Rolling Stones Houston, Luke Bryan Houston and Coldplay Houston. You can find NRG Stadium tickets for the event of your choice by using our convenient filters for things like month, category, or event type. When you click “Tickets” next to one of the NRG Stadium events, you can see all listings available in our marketplace and use tools like the price range bar to find the ones that fall within your budget. Reach out to us via Live Chat, or call 866.848.8499 for help at anytime. When your purchase is finalized and confirmed by the seller, we’ll get you your NRG Stadium tickets shipped promptly.

To choose the best NRG Stadium seats for you, utilize the seating chart and seat views features. Use our interactive NRG Stadium map for help with picking out seats for the event. It will allow you to pinpoint your search by clicking directly on the chart and viewing the pricing and availability. Note that the NRG Stadium seating chart may change depending on the event, so the display included on the page will be meant to reflect the arrangement or layout for the event you will be attending. Additionally, any special notes or instructions by the seller will be included within the listing for NRG Stadium tickets.

Houston’s NRG Stadium opened in 2002 and today is one of the city’s top destinations for big concerts from A-list music stars. Over the years, NRG Stadium concerts have included everyone from hometown hero Beyoncé to country legend George Strait, and each year new acts add the stadium to their touring schedules, like the Rolling Stones and Coldplay.

Jump to view all upcoming concerts on the NRG Stadium schedule, or continue reading this post for a breakdown of the stadium seating chart for concerts.

With capacity for over 18,000 guests, NRG Stadium boasts many seating options for concertgoers. For live music, fans can select seats on the Field Level--a rare opportunity for fans to take in live entertainment from the same level as the stage. Following the field, the stadium’s other main levels of seating include the Lower Level, the Club and Mezzanine Level, the Loge Level, and the Grid Iron Level. 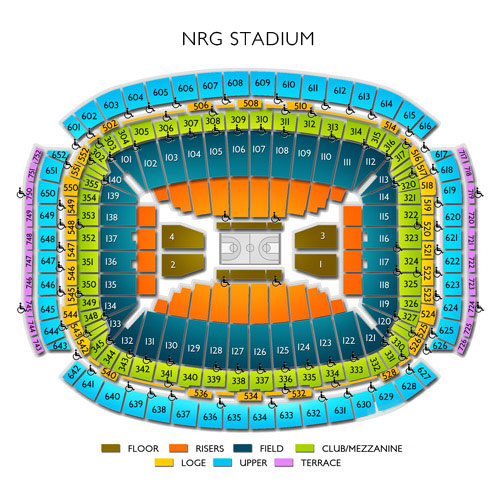 Concerts at NRG Stadium can vary greatly in the scope of the production, so you’ll need to choose your seats carefully for the view you want. Whether you decide to sit close to the stage in Field Level seats or want to view all the action from on high, there’s something for everyone at this Houston landmark.

For concerts with reserved seating, the Field Level will contain lots of rows of seats spread across the full field. There may also be general admission options mixed in with the reserved seating. Note that any GA options will not offer physical seats.

Typically artists performing in big NRG Stadium concerts will have a “B” stage located in the center of the field. There’s often a walkway from the main stage to the “B” stage, and fans sitting next to this walkway will have a close view of that part of the performance.

The Lower Level includes all the seats in the 100 Level. Though these seats run up to the field, they’re laid out with tiered rows. This positioning lets fans in rows farther back still get a good view of the stage. This type of standard stadium-style seating will continue across the remaining stadium levels.

The Mezzanine and Club Level is about halfway up the stadium seating chart. This area is best for fans who want a good view of what’s happening on stage without needing to rely on the big LED screens for the full show.

The Loge Level is second-to-last on the NRG Stadium seating chart. The Loge Level, which includes all the 500 Level sections, is one of the smaller areas of the stadium. Its sections give a more aerial-oriented view of the performance on stage.

The top of the NRG Stadium seating chart is the Grid Iron or 600 Level. Located in the upper reaches of the stadium, these seats are typically the most affordable since you’ll be farthest from the stage. Most performers bring along the big multi-story LED screens so you can see all the action on stage.