With MetLife Stadium tickets from Vivid Seats, you get to take a seat in the immaculate home of two of the NFL's most storied franchises, the New York Giants and New York Jets. And with the ability to hold over 82,000 fans, MetLife Stadium is the largest NFL stadium in the country, while also taking the prize for being the most expensive ever built. In addition to hosting Super Bowl XLVIII and Wrestlemania XXIX, you can enjoy top-notch concerts like Los Bukis, Red Hot Chili Peppers, Elton John, Paul McCartney, Lady Gaga, The Weeknd, Rolling Stones, Hot 97 Summer Jam and Coldplay, college football, international soccer, and family shows that are sure to delight. Purchase your cheap MetLife Stadium tickets by hitting the red "Tickets" link and utilizing our convenient filters like the price range bar, which quickens your search by limiting your results to show only the tickets that fall within your designated price range. To purchase, click "Buy," log in, and enter your shipping and billing information. If you have any questions, we can be reached at 1.866.848.8499, or you can chat with us via our Live Chat feature. Our 100% Buyer Guarantee assures that you’ll get your MetLife Stadium tickets in time for your event.

To choose the best MetLife Stadium seats for you, utilize the seating chart and seat views features. Already have your eyes on particular MetLife Stadium tickets? We can help you find them fast by using our interactive MetLife Stadium seating chart. All you have to do is click on the part of the arena you want to sit in and you’ll be able to see how many tickets are open, and how much they cost. It should be noted that the chart will change depending on the type of event that you’re checking. You can look at details on suites and other general seating inquiries if you click on the small link that’s adjacent to the city and venue name.

MetLife Stadium rules insist that some items must be left at home or in your car, which include, but aren't limited to: Alcohol, weapons, video cameras or still-photography cameras with lenses bigger than 6", and (non-service) animals. However, things like bags or purses that are 12" x 12" x 12" or less in size, food contained in a clear plastic bag, still-photography cameras, and blankets are allowed. Please help ensure the safety of yourself and all others who pass through the MetLife stadium gates by adhering to all of the guidelines.

Official Home of the

New Jersey’s MetLife Stadium opened in 2010 as home to the New York Jets and Giants, but today, this NFL stadium is known for more than just major sporting events. Since the year it opened, MetLife Stadium has been hosting world-renowned musicians like the Red Hot Chili Peppers, Elton John, BTS and the Rolling Stones, as well as hometown heroes Bon Jovi and Bruce Springsteen, in massive stadium concerts.

With thousands of seats to choose from, finding your ideal spot at MetLife Stadium can be tough. Below, we’ve pulled a collection of photos and videos taken from all areas of the stadium to help you decide where to sit for one of the upcoming MetLife Stadium concerts.

For most concerts at MetLife Stadium, the field will be opened as a Floor Level, which can hold either reserved seating or general admission standing-room areas. The stadium’s standard seating options in the Lower, Mezzanine, and Upper Levels are also open during performances, as are the private suites located throughout the venue. See a detailed MetLife Stadium seating chart below to understand the breakdown of each level. 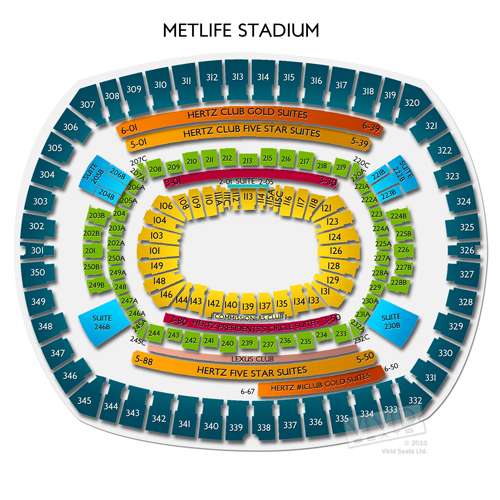 The Field Level at MetLife Stadium is not usually open for sporting events, but concerts give fans the chance to take in all the action from up close. For some events, notably Bruce Springsteen concerts and music festivals, the field will be completely general admission, meaning your spot is determined on a first-come, first-served basis. When reserved seating is available, you’ll be able to choose your section and row. Generally, the closer you are, the better you’ll be able to see the show.

When you’re farther back on the field, you may find it becomes more difficult to see over the people in front of you, but the experience of watching the performance from the field is unlike any other.

The Lower Level is the first area where fans can secure reserved seating off the field. Since each row is slightly higher up than the one in front of it, your view of the stage may be clearer than if you were to sit on the Field Level. Depending on the section you choose, your seats may be farther from the stage. Generally sections on the sides will give you the best view.

Since the stage is usually set up on one end zone, the sections directly facing the stage are also the farthest from it. These sections, though, offer a solid and direct view of the stage.

The Mezzanine Level is in the middle of MetLife Stadium’s main seating bowl. This level is one of the smallest in the stadium, so there’s a less crowded feeling when you sit here for concerts. As a halfway point between the Lower and Upper Levels, the Mezzanine provides a solid viewing experience for, typically, a mid-level price.

From the sides of the stadium closest to the stage, you’ll be better able to get a glimpse of your favorite band or artist, but you’ll have a less direct view of the performance.

The last place to find seating for MetLife Stadium concerts is the Upper Level, which features Sections 301-350. The Upper Level will be the highest up from the stage, so views of the performers are pretty limited to the giant LED screens that are affixed to most performers’ stages. You’ll be able to hear the sound well from up here, though, thanks to the stadium’s state-of-the-art sound system.