Sports are an integral part of American culture. Whether it’s singing “Take Me Out to the Ball Game” or cheering for a touchdown, nearly every one of us is impacted by the triumphs, challenges and victories that take place on fields and courts of all sorts. With fan bases numbered in the hundreds of millions, the business of sports, both on and off the field, has seen sustained growth for over a generation. Few know this better than Bloomberg sports business writer Eben Novy-Williams. Vivid Seats sat down with the talented author to discuss what players and leagues have done right, what they can do to improve and what fans of all sports can expect next.

Vivid Seats: So many young kids want to be athletes. For some, that passion turns into covering their favorite team or league. How did you wind up covering the business side of sports?

Eben Novy-Williams: The simple answer is that it was an internship that turned into a job. The longer version is that I knew I wanted to be writing about sports. I thought that was going to be at a local paper in Moscow, Idaho, not from a skyscraper in New York City, but I got lucky with a Bloomberg internship and it became something that was both fun and intellectually stimulating. Something unexpected: I’m no longer a sports fan. I’ve seen too much of how the sausage gets made.

VS: The rise of social media has created an incredible opportunity for athletes, completely changing the game as far as endorsements and sponsorship opportunities. How have you seen the space evolve for athletes?

ENW: One side effect of social media is that it has shown athletes just how popular they are. The Lakers have 8 million Twitter followers; LeBron James has 45 million. If I’m Nike, I know where I’m going to showcase my product. 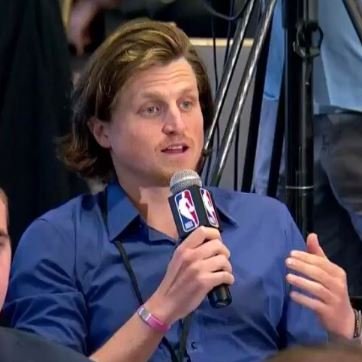 VS: Aside from social media, athletes have gotten increasingly creative in their ability to become an off-field brand. Who do you think is doing the best job of this?

ENW: JuJu Smith-Schuster. Most athletes, even when they become popular for other things, are still defined by their sport. There’s a whole class of people out there, mostly kids, who only know JuJu as a video game personality, not as a Pro Bowl wide receiver. That’s rare, especially for a 23 year old. He was the first NFLer with a dedicated YouTube channel, he participated in the most-watched Twitch stream ever, and he already has a portfolio of endorsements. Plus, he has a sweet name and is a stud on the field. If there was JuJu stock, I’d be a buyer.

VS: What are some of the most creative off-field business decisions you’ve seen since covering the sports biz space?

ENW: It’s often hard to separate gimmicks from creativity, but some definitely jump to mind. I have a lot of respect for what lacrosse player Paul Rabil is doing with his new outdoor league, and what NBA player Spencer Dinwiddie is trying with his securitized contract. The Seattle Sounders let their fans vote on things like retaining their GM, and they’ve been rewarded with perhaps the loudest supporters in sports.

But I think we’re going to see all that get eclipsed in the next 12 months. Teams and leagues are in a world of hurt financially, and they all need to be worried about keeping fans engaged without games. The most creative during this time will reap the benefits later.

VS: What untapped sources do you foresee athletes getting into in the coming years?

ENW: They’ll get smarter about how to separate their personal brands from the brand of their team and league, and then figure out ways to monetize themselves. Tiger Woods and Phil Mickelson don’t need the PGA Tour to get paid, they’ve shown that with their The Match series. What do you think networks and venues would pay for Roger Federer vs. Rafael Nadal in a best-of-seven series in Las Vegas? Or a shootout competition between the NHL’s two best goalies and its top ten skaters? There’s opportunity there for athletes of all sorts.

VS: Similarly, what new steps do you see sports leagues and brands taking to expand their reach going forward?

ENW: Here’s a secret about professional sports: It’s not really technologically savvy, or particularly innovative. In fact it’s the opposite. It’s a collection of legacy businesses that are very risk averse.

So I’ll change the question a little. What do I want to see leagues and brands doing? Take risks. Try some things out, and listen to your fans and your employees to get a sense of whether it’s working. New ticket pricing, different types of broadcasts, innovative live experiences. You never know if you don’t try.

VS: We’ve talked plenty about athletes, the leagues they play in and the brand that sponsor them. Let’s close with a question about you. What advice would you give to aspiring journalists?

ENW: On the whole, media is too white, too educated, too old, too set in its ways. It’s waiting to be shaken up by smart, young, go-getters. Think about what you offer that media organizations are lacking, and think about what you and your peers want that you aren’t getting. The entire world is changing right now, and media is no different. It will look totally different in two years than it did three months ago. It may look totally different in three months than it does now. Take advantage of it.