Chicago’s music scene is well known throughout the country -- and the world. Major acts from Earth Wind and Fire to Kanye West have helped carry the city’s sound across the globe, inspiring fans at home and abroad. While big names are an integral part of Chicago’s music history, the multitude of underground artists that are less focused on radio play and more in tune with every stage in the city are an integral part of the local scene. Meet The Palmer Squares. From their vlog-turned-podcast The TPS Reports, to performances alongside notable underground hip-hop act Psalm One and jam band Umphrey's McGee, the Chicago-based duo has spent years cultivating a following through impressive cyphers and witty rhymes. Now, The Palmer Squares opened up to Vivid Seats about their past success, their new album and what’s next. 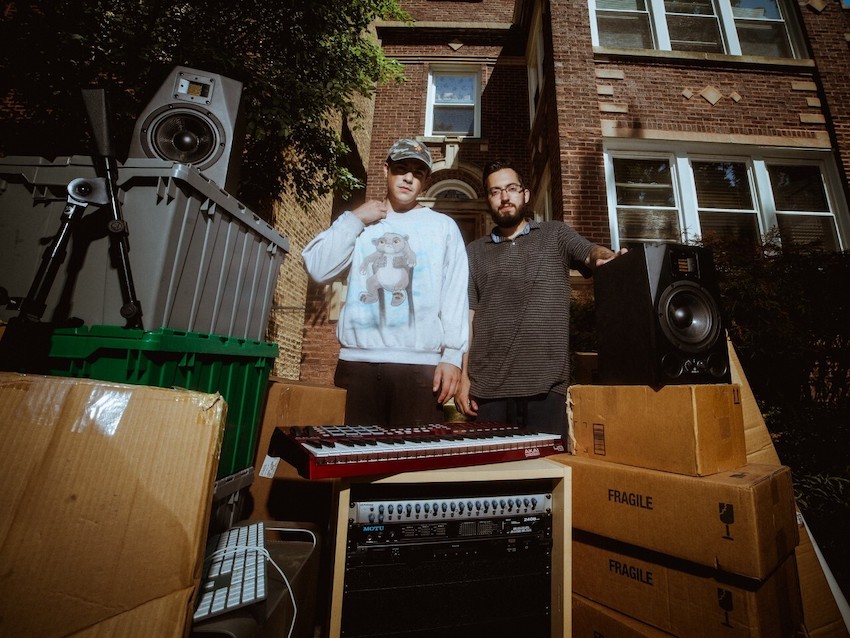 Vivid Seats: For those unfamiliar, how did The Palmer Squares get started?

Acumental: Term and I have very different musical backgrounds but I know we’ve both always shared a fascination with lyrics, poetry and the opportunity to say something meaningful and original. The two of us have been good friends since back in elementary school and we eventually started making music together in high school to prove to our classmates how much better we were than Lil Wayne...in hindsight, it turns out that Lil Wayne is actually rather talented and we were just arrogant suburban hip-hop heads who lived for the “underground” scene and held (and continue to hold) rappers like MF DOOM, Phonte and Elzhi in very high regard.

I also used to watch Wheel of Fortune and do word-search puzzles with my grandma all the time as a kid so I think that where my fascination with language began, then when I would buy new CD’s as a teenager I would always check the inside cover to see if it included song lyrics so that I could memorize them and sing along. By the time I was a junior in high school I think I had just studied so much rap music and music in general (I played drums) that I reached a point where I was determined to try it for myself.

Term: In addition I think the both of us were also raised around stand up comedy, and specifically the kind of stand up that bordered on social commentary, guys like George Carlin in particular. That kind of performance style and meticulous use of the english language really had an impact on us. I think it’s safe to say that coming from the suburbs, and me from a heavy metal background, a number of our influences had little or nothing to do with rap music.

VS: Let's talk about your newest album, "With or Without It". What were the big ideas, influences, and collaborations that helped create this album?

A: We didn’t necessarily have plans to create an album when we started writing the first couple of songs in 2018, in fact our original goal was for this project to be a 4-5 track EP but our producer N-Jin kept sending us lots of new instrumentals and the number of song ideas kept growing. We didn’t really have any sort of overlying concept in mind during production either, this was mostly just a collection of unrelated songs that all shared the same producer, however we underwent some big business changes last summer which temporarily displaced our studio resources and stifled our creative workflow, putting the album progress on hold for several months and forcing us to ask ourselves lots of questions about what was next: Where are we going to record our music now? Are we going to be able to finish the album? Should we even bother? Do we have any future in the music industry? Have I wasted the last decade of my life?

T: On the album we had sampled a quote by Phife Dawg from the A Tribe Called Quest documentary about the then current state of hip hop, which he said he could live with or without. Due to all of the bullshit we had been through, this soundbite began to have more and more significance in regards to how we were feeling about our own situation, from our prior management to making music in general.

Acumental: And it was during this odd period of uncertainty that the album found new life; we wrote a handful of new songs and recorded the second half in St. Louis while we slowly re-assembled our operation in Chicago, so if this album represents any “big idea” I think it now speaks to the fork-in-the-road mentality and the dilemma of finishing what you start when things don’t go according to plan.

VS: On top of releasing the new album ("With or Without It"), you also keep an active social media presence and a popular podcast ("TPS Reports"). What's been your approach to creating the podcast and how have you seen it grow/change your fanbase?

A: Similar to my approach with rapping, I think I just listened to so many podcasts that after several years I reached the point of wanting to do one myself, plus I saw the marketing value of a weekly podcast and knew that it could be used as a strong promotional tool. We also don’t usually release new music every week or even every month so some form of consistent weekly content seemed like a smart way to connect with fans while providing more media to our audience.

I’m not sure if the podcast is really growing our fanbase but I do know that many of our fans enjoy listening to the show and the feedback is always entertaining. Growing the podcast audience has been challenging but I think the most important thing was just getting started and committing to the weekly schedule...we’ve been at it almost three years now.

T: Yeah, I could be wrong but I’ve never assumed that the podcast would interest anyone who wasn’t already aware of us. However it’s allowed us to engage with our listeners on a level that I don’t believe we ever had and I think there’s a lot of equity in that. If it hasn’t expanded our fanbase, it's certainly strengthened the one we already have.

VS: You've had a lot of great collaborations so far - Umphrey's McGee, Canadian rapper Merkules, and Chicago's ProbCause. Who's on the list to come? Who are your dream collaborations?

A: Big shout out to ProbCause! He was one of the first artists we ever collaborated with back in 2011 and we still work on music together all the time so I feel privileged to have such a talented dude on our hometown team.

T: Yeah, Prob has taught us a lot in terms of how to carry yourself as an independent artist. Saba is a dude we’ve admired for years, even though we did a song together way back he still makes this list for sure. I would love to collaborate with a musician who doesn’t rap but could completely enhance and alter the vibe of a track like Thundercat or Steve Lacey.

VS: Chicago is the hometown of a number of hip-hop heavyweights and the birthplace of trends - Twista, Kanye, Chance, and drill music all come to mind. How do you see the Chicago hip-hop scene continuing to evolve and change the hip-hop world as a whole?

A: I’ve always loved that we just so happened to be from Chicago while pursuing this whole hip-hop music thing, like aside from NYC I’m not sure if there’s a better city in the nation for a rapper to experience and absorb inspiration from; so much talent and history in every direction. The world is in such a weird, unpredictable place right now amidst all the COVID-19 mayhem that it’s hard to tell how anything will evolve as a whole anymore, but if the music industry survives this social nightmare I’m sure Chicago will birth the most groundbreaking Skype rappers the planet has ever seen.

VS: Speaking of the city, what changes have you seen in Chicago since the start of your career and how has that affected the music scene?

T: It doesn’t even have to pertain to Chicago really. Since we started doing this I feel like the whole landscape of the industry has transformed into something rather different. We began in an era where getting signed to a major label was not just the standard dream but also really the only route. Since then platforms from YouTube, to SoundCloud, to Spotify and TikTok have sort of leveled the playing field for independent artists and have left dudes like us with no choice but to adapt. It very quickly went from people expecting maybe an album every year or two, to people will forget about you if you aren’t constantly reminding them of your presence.

VS: What's next for The Palmer Squares?

A: We’re hoping to reschedule our album release show ASAP once the Chicago stay-at-home order is lifted and book some more tour dates in the U.S. and Canada, we’ve also wanted to set up a European tour for many years so hopefully that will still be an option in the not-so-distant future. Aside from reviving our travel schedule we just want to keep working on music and with any luck we’ll be able to check a couple names off of that dream collab wishlist...stay tuned.

T: Yea other than hopefully getting back to the normal living of daily life soon, we would both love to make a project solely produced by us. We have some learning to do but I think it could really transform our sound and we would certainly thrive from having such creative control.