Gillette Stadium Ticket Information Since its opening in 2002, this Foxborough, Mass., stadium has served as one of the best home-field advantages for the NFL’s New England Patriots. Though it’s best known for being the home of local sports teams, Gillette Stadium has also hosted some of the most popular music acts in the world, including Rolling Stones, The Weeknd, Elton John, Taylor Swift, and Dead and Company. Check out the above list of upcoming Gillette Stadium events, and for easy searching, take advantage of filters on the left to view our stock by category, event type, month, or day of the week. Choose the game or concert that you would like to attend by clicking on the corresponding “Tickets” button. On the next page, you’ll be able to choose from our entire inventory of available Gillette Stadium tickets for the selected event. If you have any questions or concerns, you can contact a customer service representative by phone (1.866.848.8499) or via Live Chat.

Gillette Stadium Seating Information Due to the multi-purpose nature of the venue, a Gillette Stadium seating chart will be featured next to the listings to help you gain a better understanding of the layout for each particular game or performance. The interactive map is color-coded to help you easily locate available seats in different sections around the venue, as well as compare prices across the inventory.

On the outskirts of Boston, Gillette Stadium is a mammoth venue for live entertainment of all kinds. It’s best known as home to the New England Patriots, but in the offseason, Gillette Stadium brings high-profile concerts to music fans in Massachusetts.

The Gillette Stadium seating chart for concerts is different than the standard seating layout for Patriots games. While seats in the 100-300 Levels are all available during concerts, parts of the stadium will often be closed off to attendees since they’re behind the stage and won’t offer a full view of the show. In addition, seats will be set up on the stadium field for fans looking to get an up-close view of the show. 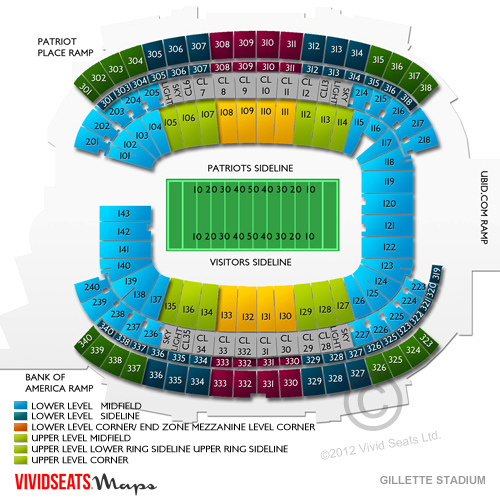 Even if you’ve been to Patriots home games, concerts offer a totally different experience at Gillette Stadium. Watch the videos below to get a firsthand feel for what seats in each level will feel like at your next show.

Since the Field Level at Gillette Stadium doesn’t have permanent seating, there are a few different layout options for the area. Usually performers will opt for a mix of general admission and reserved seating on the field, but some will choose to only feature one or the other. In the video below, you can see what it’s like to take in a Gillette Stadium concert from the front of a GA Pit.

If you’re in one of the sections closer to the sides of the stage, you’ll probably be able to see the performers pretty well. Note that for more elaborate stage setups, your view of part of the stage may be blocked by the giant LED screens.

In the 100 Level sections located closer to the rear of the stadium, you’ll have a more direct view of the stage.

The Club and 200 Level at Gillette Stadium stands at just about the halfway point of the seating chart. Higher up than the 100 Level, the Club seats give you the chance to take in the performance from an aerial view.

High atop Gillette Stadium, the 300 Level is the uppermost seating option for concerts. These seats are usually most affordable since you’ll be farthest away from the stage in these seats. However, if you don’t mind getting a bird’s-eye view of the show, the sound from the 300 Level is still great.