To lock down PPG PAINTS Arena tickets for the event of your choosing, begin by scrolling through the list above to see what’s coming to town. Click the link associated with the event to proceed to the next screen which will provide you with seating details for the available inventory. For help while browsing the PPG PAINTS Arena tickets in stock, give us a call at 1.866.848.8499 or try out the Live Chat feature at the top of the page.   PPG PAINTS Arena Seating Information Now that you’ve secured the right event, the next step is to check out the customized PPG PAINTS Arena seating chart located to the right of the listings. The page will include information on prices, quantities in stock, and open areas of the venue. To compare PPG PAINTS Arena seating across various sections of the arena, click in any of the colored boxes, which signifies the availability of seats for the event. Additional information on premium options and other venue details also can be found on the page. Official Home of the Pittsburgh Penguins

This year there will be plenty more chances to see the world’s top performers as they swing through Pittsburgh on tour. Read on for a breakdown of PPG Paints Arena concert seating options, or jump ahead to see the latest schedule of concerts at the arena.

For concerts, the PPG Paints Arena seating chart will feature three main seating areas. Standard stadium-style seating is available in the Lower and Upper Levels, which encircle the arena floor. Concerts at PPG Paints Arena also provide temporary seating options on the Floor Level, allowing fans to get up close to their favorite artists. There are also private suites located in between the Lower and Upper Levels. 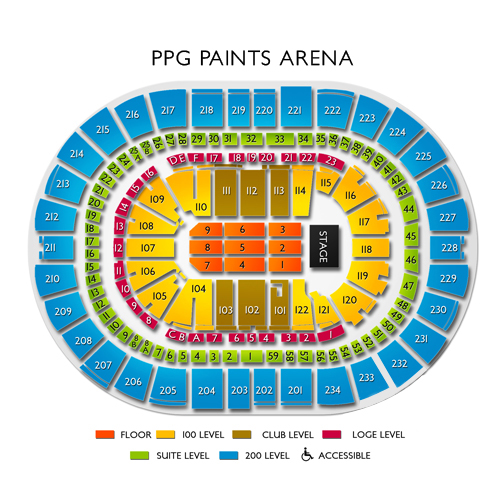 Since the stage will usually be set up on the Floor Level, seating options here are in high demand. The seating configuration may include space for reserved seating, general admission, or a combination of the two. For general admission, you’ll be packed in with fellow fans on a first-come, first-served basis. No seats are available on the floor in general admission areas.

In the Lower Level of PPG Paints Arena, the seating bowl begins. This level offers the first option for tiered rows of seats, making it a little easier to see over fans sitting in front of you. The Lower Level always features permanent seating, even when the floor is set up as a general admission area.

The suites at PPG Paints Arena aren’t always available for every concert, but these VIP areas are excellent choices for live music. With more privacy than seats in any other level, suites give you the chance to experience a concert on a more intimate level. The suites’ prime location in the middle of the arena also makes for great sound quality during the show.

In the Upper Level, you’ll be farther from the stage, but you’ll have a sweeping view of the audience and the stage where the performer is stationed. Since the stage is generally set up on the end of the arena floor, sections closer to the side of the stage may have a better view than those at the far end of the arena.