The 2016 MLB postseason was just about as thrilling as it gets, culminating with a Fall Classic for the ages, and one likely to be remembered for decades to come.

Sure, there have been championship droughts extinguished over the years, the Boston Red Sox among the most prominent, but never before had the baseball world experienced a showdown like the Chicago Cubs vs Cleveland Guardians.

It would have been exciting enough to just have one of the franchises competing for a World Series title, but in an amazing turn of events, the sports world was treated to a clash of the MLB's two longest droughts. Not surprisingly, the historic matchup sent ticket prices soaring for all seven games. Check out the full breakdown below. 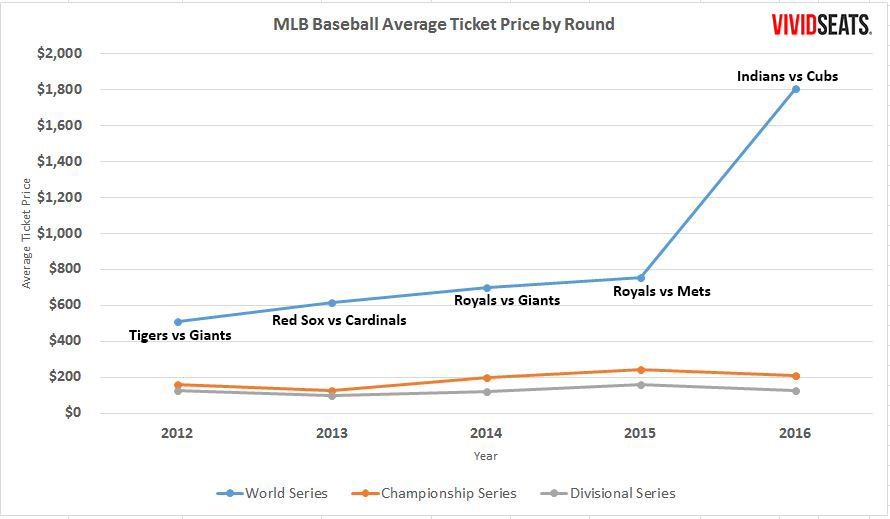 Embed our MLB Postseason Ticket Trends by Round Chart on your own site by copying the code below:

Since 2012, the best-of-seven World Series has steadily increased in the average price of sold tickets. In terms of matchups, this is not surprising, though when you take a closer look, there are some other key factors at play as well. 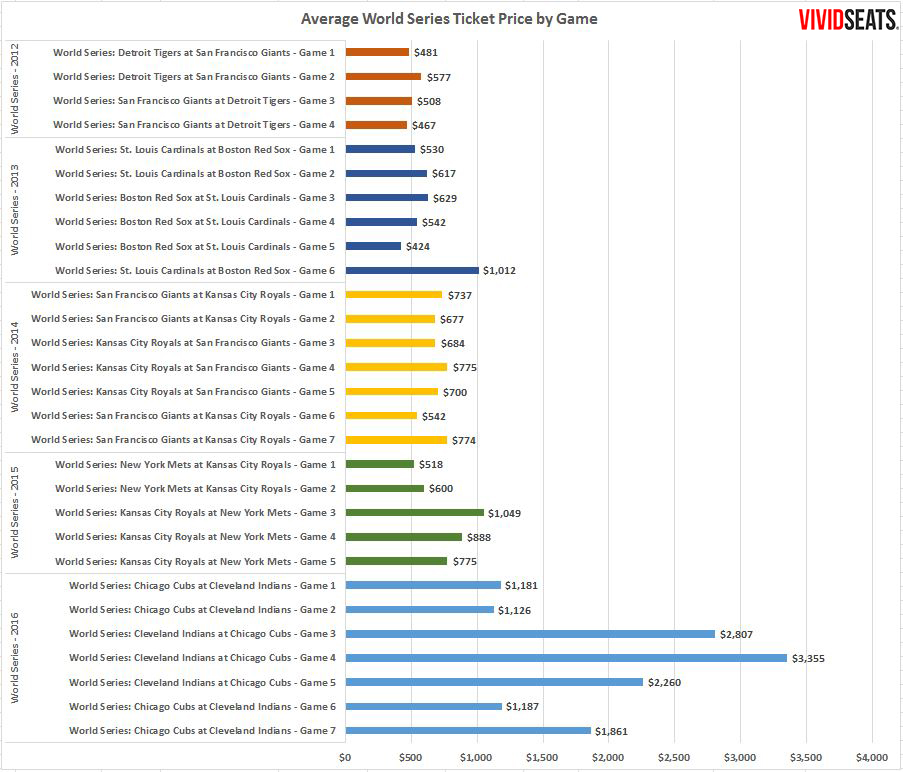 Embed our World Series Ticket Trends Chart on your own site by copying the code below:

Yes, this World Series installment earned a paragraph of its own so that we could properly answer the question: What happens to ticket prices when one franchise hasn't won in 108 years, and the other has been waiting 68 to be crowned champion?

For starters, you get an average price of $1,805 for tickets sold across all seven games, more than twice as expensive as the next closest Fall Classic (2015, $756).

Each individual game also registered higher average prices than any other World Series games before it dating back to 2012.

For the three World Series games at Wrigley, the average price was $2,807, while tickets to the four contests at Progressive Field cost an average of $1,339, making tickets to the Cubs home games twice as expensive.

The last World Series to go seven games was in 2014 featuring the San Francisco Giants and Kansas City Royals. Its overall average price? $699.

Arguably the best games for your wallet are when the series can’t be clinched…except for when the team hasn’t been in the World Series in quite some time.

Clinching at Home vs on the Road

In 2012, the Giants swept the Tigers, and the decisive Game 4 win in Detroit registered the lowest average ticket price ($467) of any clinching World Series game.

But the following year, when the Red Sox entered Game 6 at Fenway against the Cardinals with the chance to clinch (which they did), the contest produced an average ticket price of $1,012.

In 2016, many fans were clearly hoping to see the Cubs win it all in Chicago (via a sweep no less), as Game 4 at Wrigley was the highest of the series ($3,355), though it ultimately did not offer a clinching opportunity, as the squads had already split the first two games in Cleveland.

The Impact of Momentum

As momentum shifts, so too do World Series ticket prices. So while a potential clinch at home can send prices soaring, a team on the verge of elimination and competing at home has the opposite effect.

As previously mentioned, the Giants’ sweep of the Tigers had a series low of $467 since it occurred in Detroit, and it happened again in 2014 when San Francisco went up 3-2 heading into Game 6 at Kansas City.

Down 3-1, prices for the Cubs' final World Series game at Wrigley were the lowest of the homestand ($2,260).

Embed our World Series Overall Ticket Trends Chart on your own site by copying the code below: