Participating teams are key when it comes to factors driving Stanley Cup Finals prices, as a New York Rangers-Los Angeles Kings showdown was the clear winner over the past five seasons. 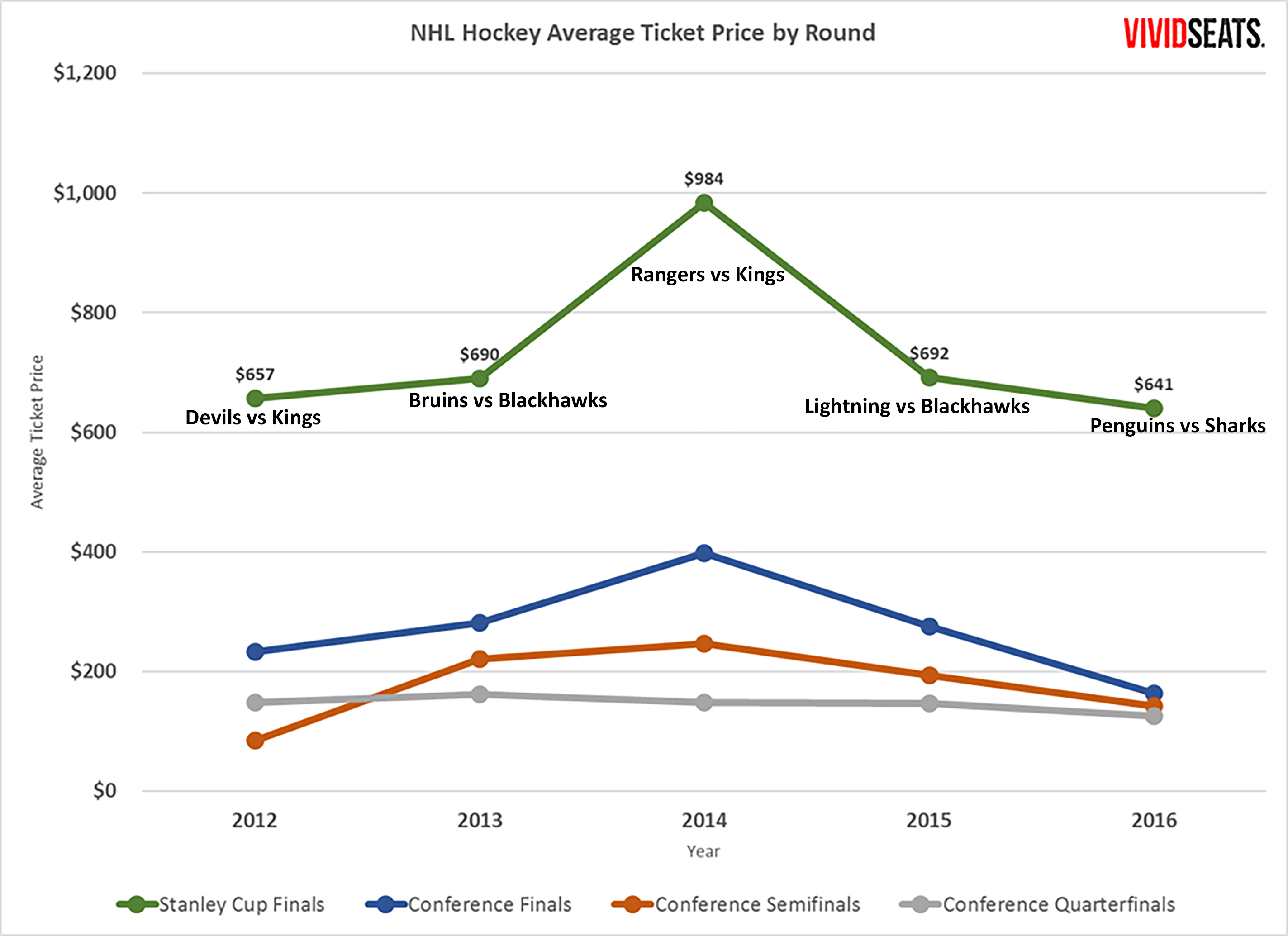 Embed this NHL Postseason Ticket Trends by Round Chart on your own site by copying the code below:

With an overall average price of $984 for sold tickets, the 2014 showdown between the Rangers and Kings remains the most in-demand Stanley Cup Final to date. If you take out the series, you get an average price of just $670. So, what caused a 47% spike? It was likely the major markets of New York and Los Angeles.

Annually ranked as two of the country’s most expensive cities, that factor is especially prominent when it comes to live event tickets, though as we'll get into later on, that’s not the only reason. 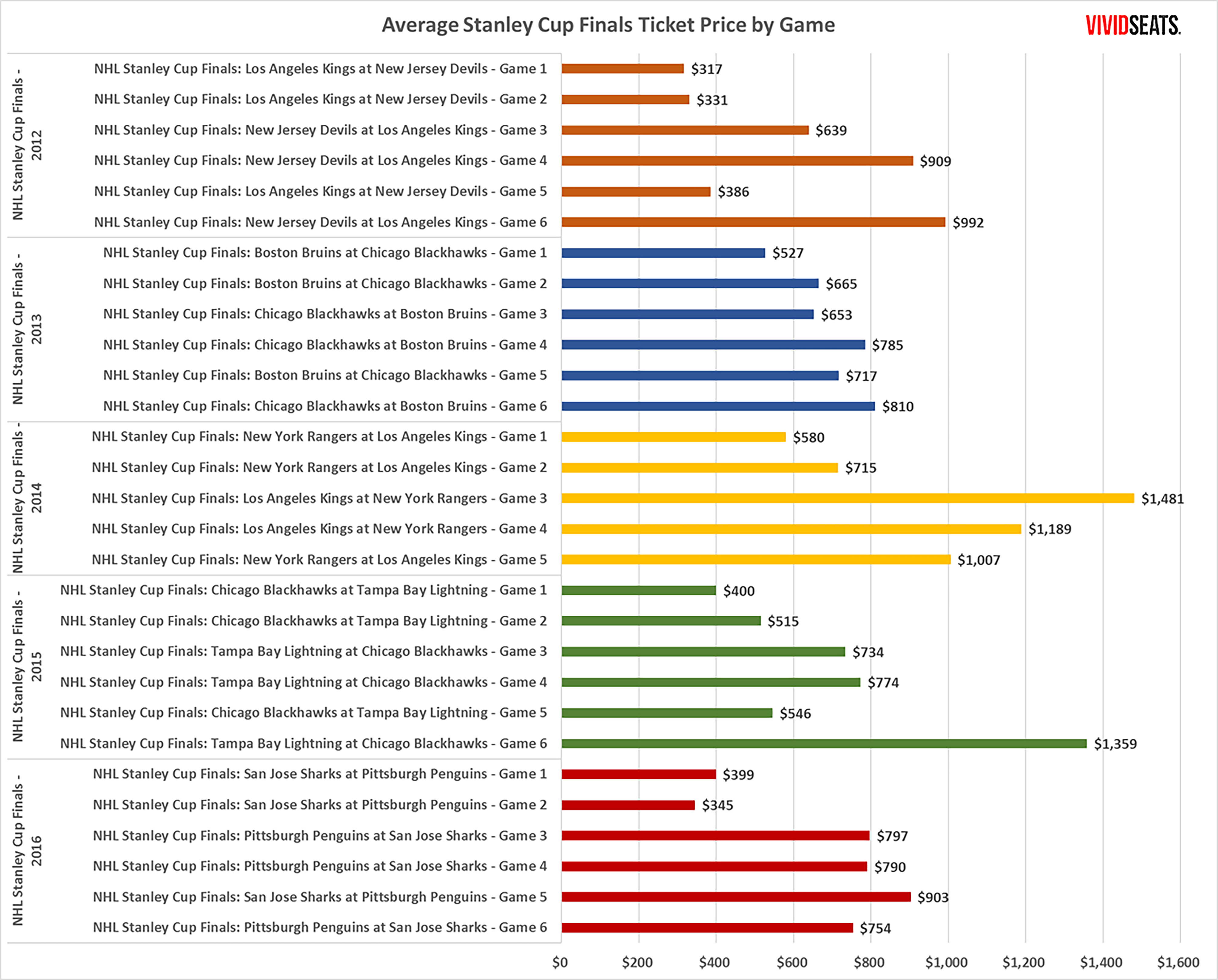 Embed this Stanley Cup Finals Game Ticket Trends Chart on your own site by copying the code below:

We know what happens when two major markets go head-to-head, but about when there's only one? The 2015 Stanley Cup Finals pitting Chicago against Tampa Bay provided one of the best examples of such a case.

As usual, Games 1 and 2 were the lowest of the series, that's not surprising. But what is rather revealing is how much prices increased once the series shifted to the Windy City.

With each team claiming a game, the series was 1-1, making it impossible for the Blackhawks to clinch during their first two home games of the series, yet prices for Games 3 and 4 were on par with what is typically seen for a clinching game.

From Game 1 to Game 4, the price increased 94% ($374) despite there being no way for the Blackhawks to clinch at that time. Game 4's $774 average price for sold tickets is not only one of the highest overall, but also is one of the highest for a non-clinching game.

Meanwhile, the eventual series win came during Game 6 in Chicago, which registered an average price of $1,359 - the highest ever for a clinching game and second-highest for an individual Stanley Cup Final game. The increase from Game 1 to Game 6? 240%.

As mentioned earlier in the post, the combination of big markets like New York and Los Angeles can have a significant impact on prices, but that doesn't get all the credit.

Our highest individual contest belongs to Game 3 of the 2014 series, which was the first Stanley Cup Final home game for the Rangers’ in 20 years so fans were understandably excited, to the tune of an average price of $1,481 on sold tickets.

Clinching a championship at home is much more appealing to fans than a series win on the road - and the prices generally prove it.

This also was demonstrated during the Blackhawks-Lightning series when tickets to the Game 6 clincher in Chicago sold for an average of $1,359.

The most recent example occurred this past Stanley Cup Final, when the Penguins went up 3-1 in the series against San Jose heading home to Pittsburgh to try and clinch it. The combined average price for sold tickets to Games 1 and 2 in Pittsburgh was $372, but for Game 5 alone the average price was $903, an increase of 143%.

Embed our Stanley Cup Finals Overall Ticket Trends Chart on your own site by copying the code below:

The Hottest NHL Hockey Matchups of the Season