This Saturday, Nov. 5, marks the date of what might be the most talked about game of the 2011 NCAA football season. Not only do the Tigers and the Crimson Tide already have a heated rivalry, but this year the two school are ranked number one and number two in the BCS standings... and if you can believe it, LSU vs. Alabama football tickets for the 11/5 game are still available!

The annual game between these two SEC schools is now known as the Saban Bowl, since former LSU coach Nick Saban was hired as Alabama's head coach in 2007. Alabama's campus is getting crazy - local TV stations have aired commercials about the big game, and news outlets are calling it "Armageddon in Alabama." Tailgaters in Tuscaloosa will turn the school's quad into a giant party; 1,700 tents are expected on the school's 20-acre center quad for pre-, post- and during-game partying; it's like the Super Bowl of college football - and here's why this game gets all the hype: 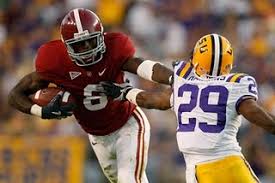 - Historically, Alabama has almost twice as many victories as LSU; however in recent history it's anyone's game!

- This year makes conference history: Saturday will be the first regular season SEC game where the BCS #1 and #2 ranked schools meet      head-to-head

- LSU won the game last year (24-21), and if they win again this year, they should have a clear path to the 2012 BCS National Championship

Tickets are already available for the 2012 BCS National Championship game in New Orleans, La. The game is scheduled for Jan. 9, 2012 at 7:00pm.

Many other college football fans are depending on the outcome of this game for their own BCS rankings and chances for certain bowl games, so the whole world of college football will be watching. ESPN's College GameDay will be on site in Tuscaloosa, Ala. for the Saturday night game, and the atmosphere will be more than intense.

Though Alabama has won a majority of the games in the total history of the rivalry, the last 30 years have seen a scale split pretty evenly, intensifying the rivalry even more. From a fan's perspective, things can get pretty heated - especially with all day to tailgate and talk smack before the primetime game under the lights. Last week at LSU, fans held signs reading, "Ready for 'Bama" or "We Want 'Bama" - needless to say, students are ready.

Whether you're a 'Bama or LSU fan or not, get your tickets for the game or make a plan to watch it at home - it's the one game of regular season college football that no fan wants to miss!

The Hottest College Football Matchups of the Season

How to Watch Florida Gators Football in 2022

How to Watch LSU Tigers Football in 2022

How to Watch Georgia Bulldogs Football in 2022

How to Watch Alabama Crimson Tide Football in 2022

The Most Popular College Football Team in Every State