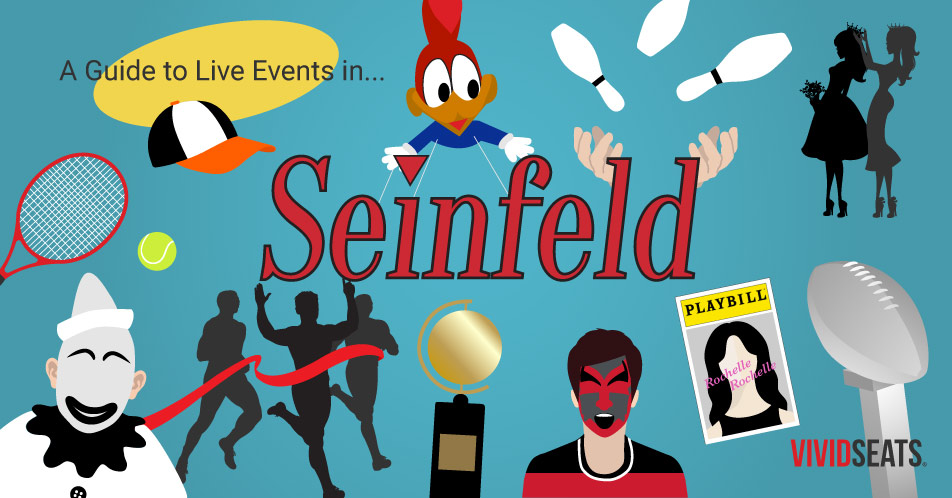 In both the real world and in Hollywood, New York City has a thriving live events scene.

The Big Apple earned Music City of the Year honors from Vivid Seats in 2017. The city's breadth of live event opportunities is nothing new: New York's theater, concerts and sporting events played a significant roles in many storylines of the show "Seinfeld."

For a show about nothing, "Seinfeld" characters surely enjoyed their share of live events. Here's a comprehensive breakdown of all the live events, large and small, featured in the classic show:

Attending Knicks games at Madison Square Garden is a recurring angle in the show. In the episode "Male Unbonding," Jerry struggles to decide who to take to the Knicks game: George or Joel Horneck. This episode also features Joel making references to both Magic Johnson (Los Angeles Lakers) and Michael Jordan (Chicago Bulls) visiting to face the Knicks, as well as games against the Seattle Sonics and Dallas Mavericks.

In "The Susie," Kramer gets kicked out of the Knicks/Pacers game after taunting Reggie Miller. This episode also references Spike Lee, a routine (and at times, high profile) presence at Knicks games, as well as Hakeem Olajuwon and the Houston Rockets.

In "The Limo," Jerry and George think they're going to Madison Square Garden to see the Knicks host the Bulls. Their limousine passengers have other ideas, however.

A New York Rangers game against the New Jersey Devils drives the plot of "The Face Painter." Jerry, Elaine, Kramer and David Puddy attend the game. Puddy has his face and chest painted. Jerry's failure to issue an additional "thank you" to Alec Berg, who gifted him the tickets, causes him to miss out on future Rangers games.

In "The Apartment," George meets Rita, who works for the Director of Madison Square Garden and claims to have access to free tickets to any sporting event in New York.

In “The Heart Attack,” Jerry and George discuss George’s prized Chicago Blackhawks jacket, though no other refences to the Blackhawks take place in the series.

Elaine attends a Yankees game with Jerry and George and insists on wearing an Orioles hat and supporting her favorite team in “The Letter.” Because she was sitting in the owner's box, her hat choice rankles the person who gave her tickets. The scene seems to play out a second time when she returns to the same seats with her boss, Mr. Lippman.

Numerous other Yankees games are mentioned in the show, including Kramer's plea to outfielder Paul O'Neill to hit two home runs (“The Wink”) and the team's sluggish performance after George suggests they change the fabric of the team uniforms (“The Chaperone”).

Two fictional giveaway days also come up throughout the show: Snow Tire Day (in “The Comeback”) and Fitted Hat Day (in “The Nap”).

Yankees legends such as Babe Ruth, Lou Gehrig, Joe DiMaggio, Mickey Mantle and Derek Jeter are all mentioned or featured in the show, as well as other recognizable Yankees players past and present.

A notorious (but fictional) 1987 Mets game plays a key role in "The Boyfriend," as Kramer and Newman seek the truth about "The Second Spitter” on June 14th, 1987. In the show, Newman references the Mets playing the Phillies. In fact, the Mets lost to the Pirates 7-3 in Pittsburgh on that date.

This episode also references Game 6 of the 1986 World Series, which had one of the most famous endings ever.

Jerry’s interest in watching the Mets on television is mentioned in “The Seinfeld Chronicles,” “The Baby Shower,” and “The Puerto Rican Day Parade.”

The episode originally aired on Nov. 18, 1993, a Thursday. Four days earlier, the Giants actually defeated the Washington Redskins 20-6 at Giants Stadium, in front of a crowd of more than 76,000 fans.

In "The Label Maker," Super Bowl XXIX is a key element of the episode plot. Jerry has tickets to the game, but does not expect to be able to attend. After a dizzying series of ticket gifting, de-gifting and re-gifting, he ends up in Miami at the game, sitting next to Newman, his nemesis.

This episode originally aired Jan. 19, 1995, just 10 days before the actual Super Bowl, in which the San Francisco 49ers beat the San Diego Chargers 49-26.

The Super Bowl is also mentioned in "The Handicap Spot." Jerry and the gang buy a big screen TV for their friend The Drake. Jerry remarks, "I am gonna make good use of this! I'm watching every Super Bowl here, every big fight…"

Tennis makes an appearance when Seinfeld and George attend the U.S. Open in Flushing Meadows, N.Y. in “The Lip Reader.” Jerry pursues a lineswoman, who happens to be deaf, at the stadium. Kramer vies for ball boy duties. George makes the television broadcast due to his aggressive eating habits.

The New York City Marathon is a key storyline to “The Hot Tub.” Elaine hosts Jean-Paul, an elite marathoner who just needs a prompt wakeup call.

Though the gang never attends The Olympics, they reference it twice. Jean-Paul is a former Olympic marathoner, while Jerry dates a Romanian gymnast (in “The Gymnast”) who reportedly won a silver medal in the 1984 Summer Olympics, which were held in Los Angeles.

A key component to " Newmanniun," Christopher Cross was slated to perform at in a revolving restaurant overlooking Times Square on New Year's Eve 2000 in the episode “The Millenium.” According to Newman, he began developing plans for this fictional event in 1978.

In “The Glasses,” Jerry surprises girlfriend Amy with tickets to the Paul Simon concert in the park (presumably, Central Park) thanks to his cousin Jeffrey, Uncle Leo’s son. Minutes later, they’re already broken up.

In “The Opera,” George expresses frustration with Kramer’s handling of selling the extra tickets to the opera. “This is not a Metallica concert, it’s an opera, alright?” Presumably, George has seen the famous metal band live. Additionally, Kramer's friend Pete helps Elaine get Metallica tickets for her driver.

In “The Stock Tip,” Kramer references making friends “at a rock concert.”

Not only does Jerry’s standup book end most episodes in the first seven seasons, but Jerry performing on stage is woven into the storyline of episodes like “The Phone Message,” “The Pitch,” and perhaps most famously, “The Butter Shave,” in which Jerry purposely tanks his performance to make the audience hostile for Kenny Bania’s subsequent act.

Jerry, George, Elaine and Kramer attend the opera, where they see Pagliacci, a drama featuring a clown. The gang learns of the struggles of selling tickets outside the venue before taking in the experience with Harry Fong (and "Crazy” Joe Divola).

The Three Tenors (Paverotti, Domingo and “the other guy) are featured in “The Doll.” In that same episode, Elaine’s boyfriend, The Maestro, leads a performance at the Queens Convalescent Center.

In "The Beard," Elaine takes in "Swan Lake" at the Metropolitan Opera.

In "The Wig Master," Susan's friend Ethan visits New York City while working on a production of "Joseph and the Amazing Technicolor Dreamcoat."

In "The Opera", Kramer admits to “Crazy” Joe Divola that he attended the circus as a child, perhaps contributing to his coulrophobia.

In “The Bizarro Jerry,” Feldman gets Kevin, Gene and Elaine tickets to the Bolshoi Ballet. Elaine is so excited, that she shoves Kevin and shouts, “Get out!”

In "The Outing," George buys Jerry two tickets to Guys and Dolls as a birthday gift.

First referenced in "The Movie," George rents it in movie form in the episode "The Smelly Car.”  “Rochelle, Rochelle" later comes to Broadway in "The Understudy." When George injures star Bette Midler in a softball game, it paves the way for Jerry's girlfriend to fill in for the lead role.

In “The Friars Club,” confusion over a missing blazer ruins Jerry and George's trip to see the Flying Sandos Brother, inspired by (and played by) the real life Flying Karamazov Brothers, a juggling and comedy troupe.

This Tony Award-winning musical stars Raquel Welch, who notoriously refused to swing her arms while dancing, leading to problems for both Kramer and Elaine.

In “The Pez Dispenser,” Elaine’s laugh steals the show as George’s girlfriend, a classical pianist, performs at the McBierney School, a reference to the McBurney School, a now-defunct New York City high school well known for its famous alumni in the arts.

When Jerry dates Miss Rhode Island in “The Chaperone,” he heads to Atlantic City with Kramer in tow. Kramer tries to coach Jerry's girlfriend to pageant victory but comes up woefully short.

Kramer and Jerry both attend the Tony Awards in "The Summer of George." Jerry attends with a date, while Kramer serves as a seat-filler.

Elaine heads to the Macy's Thanksgiving Day Parade with Mr. Pitt in "The Mom & Pop Store" after winning a radio contest that earned them a chance to hold the Woody Woodpecker balloon.

Live-audience talk shows are featured throughout the show. David Letterman boots Jerry from his show in “The Abstinence.” In “The Shower Head” and “The Trip,” Jerry appears on The Tonight Show with Jay Leno. Two references to Jerry appearing on the Tonight Show, hosted by Johnny Carson, also occur throughout the show. Carson stepped down as host of the show in May 1992.

Jerry also appears on The Today Show, wearing a puffy shirt in “The Puffy Shirt” and on The Charles Grodin Show on “The Doll.”

In “The Opposite,” Kramer promotes his coffee table book on “Live! With Regis and Kathy Lee.” He also recreates "The Merv Griffin Show" in an episode of the same name.

Perhaps the greatest live event of all. Festivus takes place each year on Dec. 23 in the home of Frank and Estelle Costanza (“The Strike”).