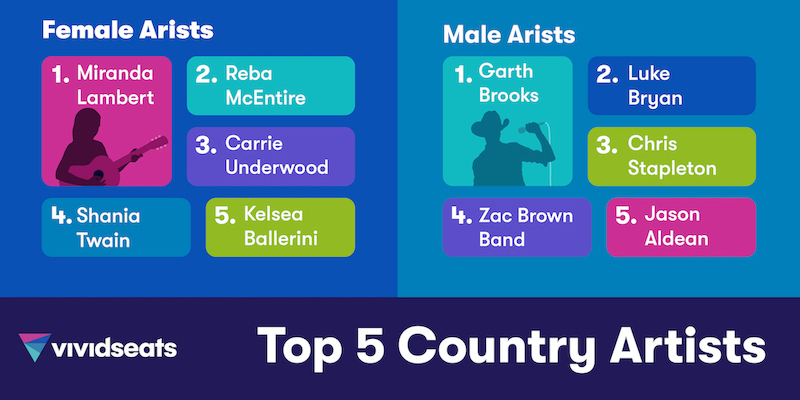 There is no denying that the United States is full of country music fanatics. While some country music mainstays have performed in sold out stadiums for decades, plenty of newcomers continue to break onto the scene. With so many making their mark on the genre, which country artists are fans flocking to experience live?

After analyzing ticket sales over the last five years, from 2017 to present day, Vivid Seats found that country music singer and songwriter Miranda Lambert is the most popular female country artist, dominating concert ticket sales in 27 different states. Garth Brooks, one of the biggest names in the industry, was the most popular male country artist across 18 different states. It's clear that these two popular powerhouses have excelled at entertaining fans across the country and are a must-see live in concert.

Behind Lambert is Carrie Underwood, who is the top ticket selling artist in a total of 8 different states. Reba McEntire, Shania Twain and Kelsea Ballerini are also represented in the top five most popular female country artists.

As for which state loves country the most? Vivid Seats compared the population of each state to the number of country concerts that take place there each year. After comparing all 50 states, it's clear that the best state for live country music was no surprise with Tennessee— the country music capital of the world. Not trailing far behind was Nevada, which hosts the second-most concerts per capita of any state. Montana, Nebraska and Missouri rounded out the top five best states for country music lovers.

To find out who the top country singers are in your state, and the best venues to catch them, view Vivid Seats' interactive country music map below:

To find tickets to your next favorite country music concert, view all country concert tickets on Vivid Seats!

Map: Find the Closest Kane Brown Concert Near You